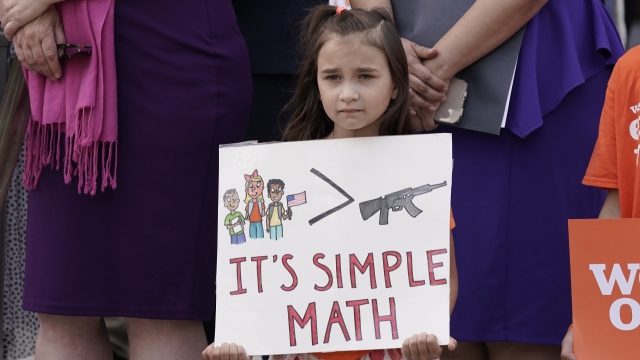 Members of “100 Black Men of America” aren’t trying to change laws, or even flip congress. Instead, the group believes in mentoring kids, teens, and young adults; focusing on communities of color, to create a new culture narrative around guns.

“Many of these children who are committing crimes right now are 12 and 13 years old,” said Joshua Byrd.

Byrd, who is the Chairman for the anti-gun violence committee for the Atlanta chapter of “100 Black Men of America,” spent some of his childhood years in Atlanta’s Techwood Homes, one of the first government projects in the United States.

“In Techwood, I think it was my first time seeing someone get shot and killed,” said Byrd.

He now has a master’s degree in criminal justice and is a professor and mentor working with the national group “100 Black Men” to change the conversation around gun culture in America. Members work to keep kids out of trouble, and away from violence, guns, and gangs.

“Why mentorship is so important? is because the day you become inconsistent, the gangsters will step in and reinforce this idea of ‘see, I told you, they’re not here for you. They’re in, they’re out. I’ve been there, I’ve always been here,'” said Byrd.

According to the Centers for Disease Control and Prevention, gun violence is now the leading cause of death for children, as firearm-related fatalities soar in 2022.

CDC data shows gun homicides in the U.S. reached their highest level in more than 25 years during the COVID-19 pandemic, with Black Americans suffering the most. The “100 Black Men” anti-gun violence project focuses on creating anti-violence messaging and programs to identify and prevent conflict and violence.

“What we know about crime is that it literally heats up in the summertime. Students will not be supervised as they have at school,” said Byrd.

Byrd says with kids out for the summer, it’s important to keep them busy as much as possible, with after school or summer programs, jobs, sports and other activities. And for parents who work and have less resources, Byrd says communication is key.

“One of the messages throughout the summer is to have regular, consistent communication. Having a structured day with consistent check-ins can go a long way,” said Byrd.