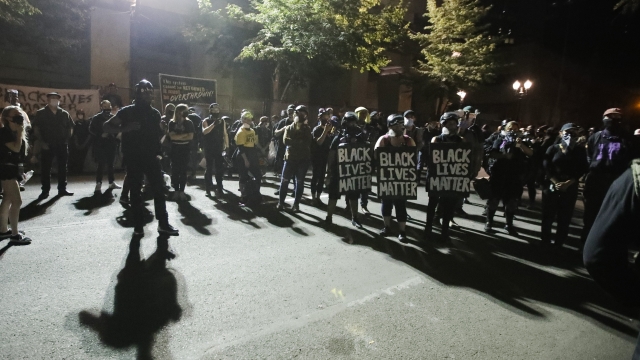 SMS
Oregon Local And State Officers Replace Federal Agents In Portland
By LeeAnne Lowry
By LeeAnne Lowry
July 31, 2020
The president on Thursday said Oregon officers have two days to "clean out this beehive of terrorists" before he calls in the National Guard.
SHOW TRANSCRIPT

Oregon local and state police have taken the place of federal agents guarding a federal courthouse in Portland.

On Wednesday, the federal government and Oregon's government made a deal to reduce the number of U.S. agents on the ground.

The federal agents reportedly left the area Thursday. But President Donald Trump warned at a press conference later that day that Oregon officers have 48 hours to "clean out this beehive of terrorists" or he'll send in the National Guard.

Hundreds of protesters peacefully gathered in downtown Portland again Thursday night, calling for an end to systemic racism and chanting "Black Lives Matter." The crowd dispersed on its own early Friday with no major altercations. Nightly protests over racial injustice and police brutality in Portland began in late May after the death of George Floyd. President Trump deployed federal law enforcement officers to the area in early July as more and more protests turned violent, but that only inflamed tensions further.