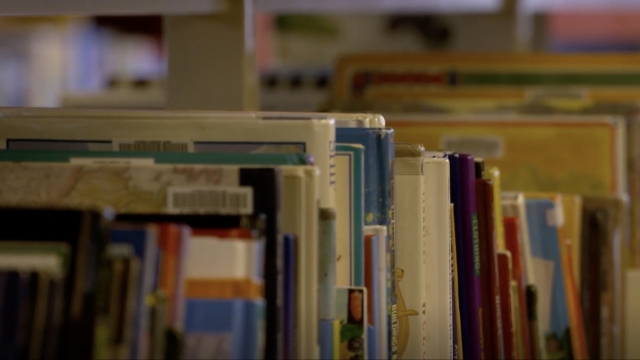 A chapter of uncertainty lies ahead for the Patmos Library in Jamestown, Michigan — a town of about 8,600 near Grand Rapids.

In November, the town voted against a millage, or property tax rate, that would have funded the library for the next 10 years, leaving many to wonder how the library can remain open without taxpayer dollars.

The reason for cutting support was a dispute over the library's refusal to remove a handful of LGBTQ-related books.

"We will be closing in September of 2024," a member of the Patmos Library Board said. "We will have to close the library's doors because we will be out of money. Once we run out of money, we are done. Period."

People packed into the library this week for the first board meeting since some 56% of voters rejected the funding. Community members took turns addressing the room — some in support of the outcome, and others in dismay over censorship and the future of the library.

Some comments and questions from residents included, "How does the board intend to address book challenges moving forward and potential litigation?" and

"We deserve to have a library that represents all people, all people in this community, even if they are the minority."

As library officials and community members work to figure out what comes next, many families have been left in limbo. Historically, Jamestown has been home to many families that have opted to homeschool their children, with the library playing a crucial role in supporting that process.

"Most of the community is like conservative, religious, like Calvinist, reformed Dutch Americans," said Connor Cook, a former Jamestown resident. "Just out of tradition, a lot of people homeschool their families. I was homeschooled. So for us, the library was a mixture of fun but also work."

Cook, now a medical school student, grew up in Jamestown. He spent a handful of summers volunteering at the library as a teen.

Efforts to ban books are happening both at the local and state level.

"There's literally only one thing in town: It's Patmos Library," Cook said. "It's the only public institution. It was a place that was safe for people like me, and there aren't a lot of those in West Michigan. So that's kind of why I think it's really important in this discussion. It wasn't until college that people knew I was gay."

Area residents challenging the library cited LGBTQ books, including the best-seller "Gender Queer, A Memoir." But Cook says this vote and the campaigns leading up to it send a dark message to LGBTQ kids growing up in the community.

"For me, when it was quietly homophobic, it was isolating," Cook said. "I think there is something that they're experiencing that is worse when it is like a sign on every corner. That is next level. I didn't have that as a kid. That does scare me."

Jamestown is among a number of communities in the U.S. battling over books.

"It's not a new phenomenon, but what we are seeing in the past year is greater coordination and organization and targeting, not just of the same books across many places in the country, but longer lists of books," said Jonathan Friedman, the director of free expression and education programs at PEN America.

According to PEN America — a literary and free expression non-profit — as of July, 41% of books being challenged in libraries and school districts across the country are LGBTQ related.

"A lot of the time it's not clear that anyone is reading the books," Friedman said. "They might just get a snippet of a book online or be told that was a book that they should... be upset about, and then complaints come to school districts on that basis alone."

Part of the problem is that there is no official process for reaching a decision on challenged books.

"We need to have a process for these books," Friedman said. "Nobody would proclaim a book, I don't know, guilty without any kind of trial."

But it's an idea easier said than done.

"I think the library can exercise a little judgment prior to getting the books on the shelf to begin with," one resident said at the board meeting. "That makes a lot more sense to me than defunding the library and shutting it down."