This Candidate Is Dominating $1 Donations 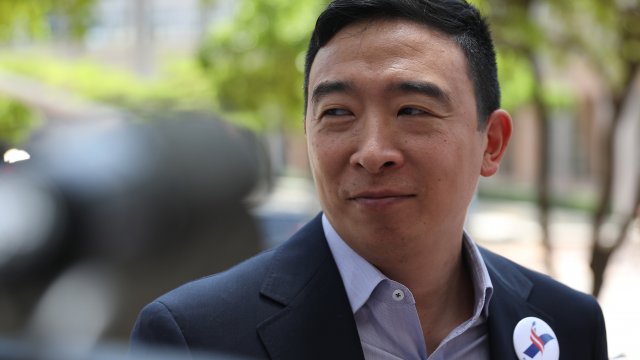 The value of a dollar has skyrocketed for Democratic presidential candidates struggling to qualify for the debates.

But a Newsy analysis of Federal Election Commission data found the field is far from equal when it comes to earning a buck, with one candidate standing notably above the rest: Andrew Yang.

Yang has attracted donations from more than 33,000 "dollar donors" -- people who have given only one dollar to a campaign. That is almost twice that of Sen. Cory Booker -- who has the second most dollar donors with more than 17,000.

Also notable is that 26% of Yang's small dollar donations -- those less than $200 -- have come in the form of a dollar. And more than 80 percent of those individuals gave $1 to him and no one else.

Only Sen. Bernie Sanders has a higher number of unique dollar donors.

The findings give a window into how Yang has been able to meet the donor thresholds to qualify for debates more easily than many of the elected officials he is running against. Though his overall fundraising totals are near the middle of the pack, Yang hit the 65,000 and 130,000 unique donors benchmark while some sitting U.S. senators and governors have not.

His $1 donations began to pick up on Feb. 12 following an appearance on Joe Rogan's podcast. His supporters -- know as the #YangGang -- quickly circulated the interview among the candidate's robust social media networks.

During the early months of 2019, Yang and his campaign were aggressively tweeting their progress towards hitting the 65,000 donor mark needed to make the first debate -- when his rivals were not making such overt appeals.

"Being transparent about fundraising has absolutely helped the campaign reach its fundraising goals. The Yang Gang is part of our campaign, and there's no reason we shouldn't be transparent with our fundraising totals with them," a Yang spokesperson told Newsy in a statement.

Candidates With Most Dollar Donors

"Dollar donor" defined as an individual who gave only $1 to a campaign.