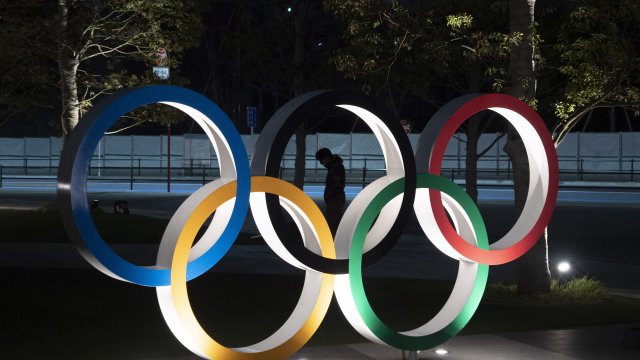 SMS
NBC Invests A Lot In The Olympics — So What Happens Next For Them?
By Casey Mendoza
By Casey Mendoza
March 25, 2020
Insurance could cover some of the losses, but NBC is still likely to take a huge hit.
SHOW TRANSCRIPT

The 2020 Tokyo Olympics will be postponed until next year in an effort to slow the spread of the coronavirus pandemic.

The decision follows several other postponements and cancellations hitting the live entertainment industry — and the news hits one media company especially hard.

Peacock Announcement: "There's nothing that brings the world together like the Olympics. … And this summer, Peacock will give audiences a front row seat."

When NBCUniversal announced details of its upcoming streaming platform Peacock, the company used the Olympics as one of its biggest selling points — developing three different daily shows for the games and showcasing a dedicated channel with exclusive content.

Brett Sappington: "I think that NBC was really hoping to use the Olympics as a springboard to be able to drive people to their site, to their app, to be able to gain some momentum."

Peacock's future is uncertain now that the Olympics have been postponed — but some experts have noted that the streaming platform always had to figure out how to be successful without it.

Sappington: "I think for Peacock, it's more of a lost opportunity than a risk for success. Peacock was going to have to be successful even after the Olympics was over."

Beyond a lost opportunity for Peacock, NBC will still have to deal with the coronavirus disruption. The company had already "sold more than $1.25 billion in advertising commitments … to go with 7,000 hours of broadcast, streaming and social media content."

Insurance could cover some of the losses, but the company is still likely to take a huge hit. When the U.S. boycotted the 1980 Moscow Olympics, NBC lost $34 million after insurance payouts. In today's dollars, that's more than $100 million in losses.

The company's current deal with the International Olympic Committee is worth $7.75 billion and lasts until 2032. It's the most expensive television rights deal in Olympic history.