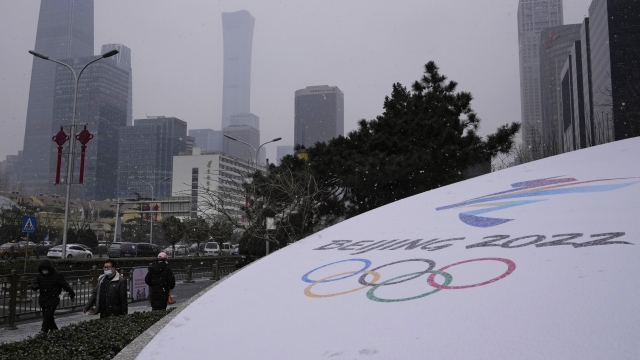 SMS
Olympians Grapple With COVID-19 Outbreaks Ahead Of Beijing Games
By Associated Press
By Associated Press
January 25, 2022
Several organizations are battling virus outbreaks among athletes and personnel, with the 2022 Winter Games slated to open in less than two weeks.

The 2022 Beijing Winter Olympics open in just over a week while several athletes and sports organizations are battling COVID-19 outbreaks.

Russian figure skater Mikhail Kolyada has been ruled out of next month's Beijing Olympics after testing positive for the virus.  The Russian Figure Skating Federation says Kolyada tested positive ahead of traveling to a pre-Olympic training camp and has been replaced.

Kolyada was the only member of Russia's three-strong men's team who had previously competed at the Olympics and the only former world championship medalist after winning bronze in 2018.

Additionally, every member of Norway’s men’s Olympic cross-country skiing team is isolating ahead of the Beijing Games because a coach has contracted the virus.

The Norwegian Ski Association says all eight team members have been defined as a close contact of Monsen and have to delay their departure to Beijing. The team will depart on Monday instead of Thursday.

Norway is the leading nation in cross-country skiing, winning four of the six men’s events at the 2018 PyeongChang Games.

Meanwhile, players called on the German hockey league to consider suspending its operations Tuesday because of coronavirus outbreaks, just as its 2018 men's silver medal-winning national team revealed its roster for next month's Olympics.

The Ice Hockey Players' Union, which represents players in the German pro leagues, said the virus was so widespread in the Bundesliga that the league should consider following the example of the Russia-based KHL, which had a week-long stoppage with the aim of breaking the chain of infection before the Olympics.

Germany named 10 of the players from its 2018 team on its 25-man roster for Beijing on Tuesday. Six of the players on the roster are from the Bundesliga team Adler Mannheim, which said Monday it had been ordered to shut down operations by city health authorities after 14 players and staff members tested positive.

A cluster of COVID-19 cases in Beijing has prompted authorities to test millions and impose new measures, even as the city of Xi'an in north-central China lifted on Monday a month-long lockdown that had isolated its 13 million residents.

At least six Beijing neighborhoods have been targeted for lockdowns and officials in Beijing said they would conduct a second round of mass testing of the Fengtai district's 2 million residents, where the majority of the capital's 40 coronavirus cases since Jan. 15 have been found.

The severe measures, despite a relatively low number of cases, illustrate the acute concern of government officials in the run-up to the Olympics, which open in Beijing on Feb. 4.