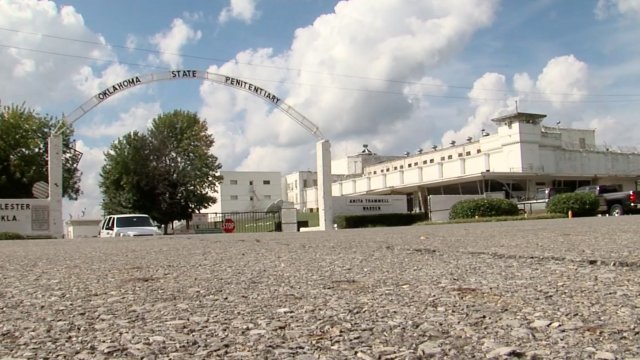 SMS
Oklahoma Plans To Be The First State To Use Nitrogen For Executions
By Gabrielle Ware
By Gabrielle Ware
March 14, 2018
It follows a three-year delay in executions due to a lethal injection drug shortage.
SHOW TRANSCRIPT

Oklahoma plans to be the first state to use nitrogen gas for executions. The decision follows three years of delays in capital punishment due to a lack of availability of lethal injection drugs.

State Attorney General Mike Hunter told the Associated Press: "We can no longer sit on the sidelines and wait on the drugs. Using (nitrogen) will be effective, simple to administer, easy to obtain and requires no complex medical procedures."

There's a nationwide shortage of an anesthetic component of a three-part mixture used in some lethal injections. That's caused forced delays and changes in protocol in several states.

In 2015, Oklahoma introduced an indefinite stay on executions after prison officials injected one inmate with the wrong drug and came moments away from doing it again to another inmate.

Not everyone is on board with the new method, however, a public defender for one death row prisoner said, "How can we trust Oklahoma to get this right when the state's recent history reveals a culture of carelessness and mistakes in executions?"