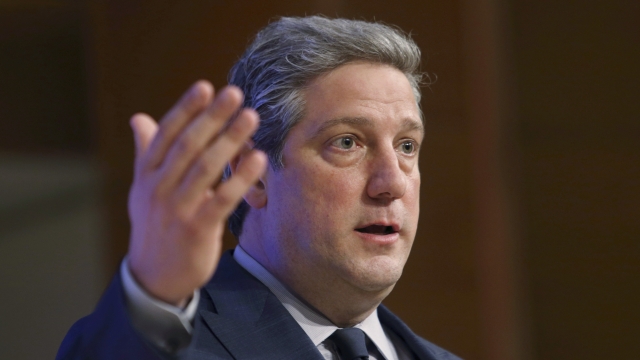 The first debate between Democratic U.S. Rep. Tim Ryan and Republican JD Vance descended quickly into attacks Monday, with the candidates for Ohio's open U.S. Senate seat accusing each other of being responsible for job losses and putting party loyalty ahead of voters’ needs.

Vance said Ryan had supported policies that led to a 10-year-old girl in Ohio being raped. Ryan said Vance had started a "fake nonprofit" to help people overcome addiction issues. The two accused each other of being beholden to their party, with Ryan echoing a comment from former President Donald Trump in calling Vance an "a— kisser" and Vance saying Ryan’s 100% voting record with President Joe Biden means he’s not the reasonable moderate he says he is.

The Ohio Senate race is an expensive one — with $65 million spent in the general election according to AdImpact.

The face-off between Ryan, a 10-term congressman, and Vance, a venture capitalist and author of "Hillbilly Elegy," for the seat being vacated by retiring GOP Sen. Rob Portman was one of the most contentious debates of the general election season so far. The race is one of the most expensive and closely watched of the midterms, with Democrats viewing it as a possible pickup opportunity in November.

Both candidates sought to tailor their messages to the working-class voters who could determine the election in an evening peppered with barbs and one-liners.

Ryan sought to paint Vance as an extremist, someone who associates with "crazies" from his party who falsely claim the 2020 election was stolen, support national abortion restrictions and contributed to the Jan. 6 attack on the U.S. Capitol.

Vance suggested Ryan’s focus on allegation of extremism was meant as a distraction from pocketbook issues important to voters, such as inflation and the price of groceries.

"It’s close to Halloween and Tim Ryan has put on a costume where he pretends to be a reasonable moderate.” Had he been, Vance said, “Youngstown may not have lost 50,000 manufacturing jobs during your 20 years."

Ryan said: "I’m not gonna apologize for spending 20 years of my adult life slogging away to try to help one of the hardest economically hit regions of Ohio and dedicating my life to help that region come back. You ought to be ashamed of yourself, JD. You went off to California, you were drinking wine and eating cheese."

Vance countered that he left Ohio at 18 to join the Marines, and after working in Silicon Valley, he returned to Ohio to raise his family and start a business.

During questioning about China, Ryan said Vance invested in China as a venture capitalist, the type of business move that exacerbated job losses in Ohio's manufacturing base. "The problem we're having now with inflation is our supply chains all went to China, and guys like him made a whole lot of money off that," Ryan said.

Democratic candidates are facing relentless criticism from Republicans who want to make the election a referendum on the president's performance.

Vance said it is Democratic economic policies that have harmed manufacturing, saying, "They have completely gone to war against America's energy sector." He said he could not remember investing in China.

On abortion, Vance did not answer whether he would support Graham's proposed national ban after 15 weeks of pregnancy, with some exceptions. Vance said he thinks different states would likely want different laws but "some minimum national standard is totally fine with me."

He called himself "pro-life" but said he has "always believed in reasonable exceptions."

Ryan said he supports codifying the abortion rights established in Roe v. Wade, which was overturned by the U.S. Supreme Court in June. He said he opposes Ohio's law banning most abortions after fetal cardiac activity has been detected, as early as six weeks into pregnancy, which was blocked Friday.

Vance agreed with Ryan that a 10-year-old Ohio rape victim should not have had to leave the state for an abortion, but he said the fact the suspect was in the country illegally was a failure of weak border policies.

"You voted so many times against the border wall funding, so many times for amnesty, Tim," Vance said. "If you had done your job, she would have never been raped in the first place."

On foreign policy, the pair parted ways on what the U.S. response should be if Russian President Vladimir Putin were to launch nuclear weapons in Ukraine.

Ryan said the U.S. should be prepared with a "swift and significant response," while Vance countered that the United States needs a "foreign policy establishment that puts the interests of our citizens first."

Ryan responded: "If JD had his way, Putin would be through Ukraine at this point. He’d be going into Poland."

"If I had my way," Vance retorted, "you’d put money at the southern border, Tim, instead of launching tons of money into Ukraine." It echoed comments Vance had made in an interview before Russia's invasion of Ukraine, saying he didn't "really care what happens to Ukraine one way or another" because he wanted to see President Biden focus on his own country's border security.

While the general election debate between Ryan and Vance was acrimonious, it didn't lead to a near-physical altercation, as an Ohio GOP Senate debate back in March during the primary season did. Former state Treasurer Josh Mandel and investment banker Mike Gibbons found themselves face to face on the debate stage, shouting at each other, while Vance told the two to stop fighting.

At the end of Monday's debate, Vance and Ryan shook hands.