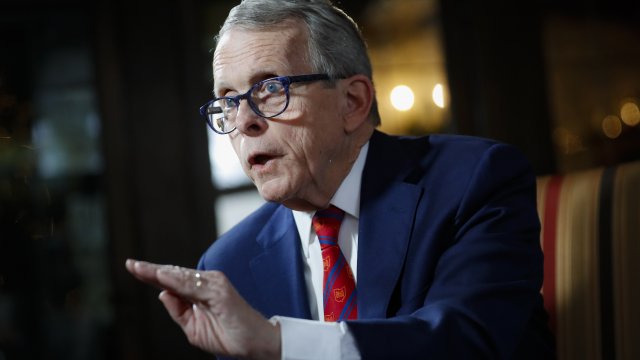 SMS
Ohio Governor Warns Against Doubting Coronavirus Tests
By Alex Arger
By Alex Arger
August 9, 2020
"People should not take away from my experience that testing is not reliable or it doesn't work," said Ohio Gov. Mike DeWine.
SHOW TRANSCRIPT

Ohio's governor got both positive and negative coronavirus test results back. But that doesn't mean he thinks COVID-19 testing is unreliable or that skeptics are right.

Governor Mike DeWine's rapid-result antigen test gave a positive result ahead of a planned meeting with President Donald Trump. Then, a laboratory test returned a negative result hours later. He and his wife tested negative for a second time Saturday.

But DeWine told CNN Sunday the antigen test he first took should be looked at as a screening test, not as a diagnosis.

DeWine said, "People should not take away from my experience, that testing is not reliable or it doesn't work. What I took was, as you pointed out an antigen test, which is really should be looked at as a screening test. One point 3 million  Ohioans have taken a PCR test. That test is very, very, very reliable."

In April, CNN reported the antigen tests don't have a consistent track record. The World Health Organization say they range between 34 to 80% accurate in identifying patients with the virus.

The conflicting results of DeWine's tests come amid a disturbing development: the Associated Press says even though death tolls are rising, the number of daily tests have been falling in recent weeks.

While the White House says the U.S. leads the world in the number of tests given, President Trump has suggested less testing would hold down the number of reported cases. Experts blame the current drop in testing on people's frustration with long waits to be checked and even longer delays to get results.