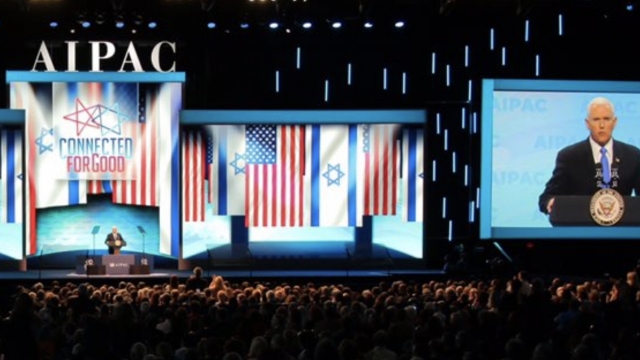 Lawmakers were hoping to strike a bipartisan tone at this year's AIPAC conference but were largely overshadowed by concerns of anti-Semitism in Congress. Democrats answered for the tension caused by Congresswoman Ilhan Omar's recent comments, among them equating support for the American-Israel Public Affairs Committee with dual loyalty to the U.S. and a foreign country.

"Throughout history, where there are charges of dual loyalty, those charges often lead to attacks and violence and being kicked out of countries and death. It wasn't about policy. It was about questioning those who support Israel," added Rep. Ted Deutch of Florida.

On the main stage, high-profile leaders from both parties, like Speaker Nancy Pelosi and former U.N. Ambassador Nikki Haley, shied away from criticizing the other party's approach to Israel. But the GOP's highest-profile attendee,Vice President Mike Pence, pulled no punches.

"It's astonishing to think the party of Harry Truman, who did so much to help create the state of Israel, has been co-opted by people who promote rank anti-Semitic rhetoric and work to undermine the broad American consensus of support for Israel," Pence said.

However, it was during smaller, more focused discussions that attendees worked on a bipartisan approach to solving many of the issues facing American Jews. GOP Rep. Mark Meadows, who is typically supportive of the Trump administration, made a point not to criticize Omar but to encourage a continued dialogue.

Rep. Deutch says "it's very important that we try not to use the U.S.-Israel relationship for political gain, because ultimately it's by standing together that we strengthen Israel the best."

With arguably more attention on AIPAC and its mission than ever before, the organization is emphasizing its ability to work with both sides of the aisle. Meadows — the chairman of the ultra-conservative House Freedom Caucus —  and Deutch told a crowd at the organization's annual conference they often find common ground on the issues. The two have passed numerous pieces of pro-Israel legislation together.

"We established that very early on that we were not going to let politics get in the way of a passion for him and for me," Meadows said.