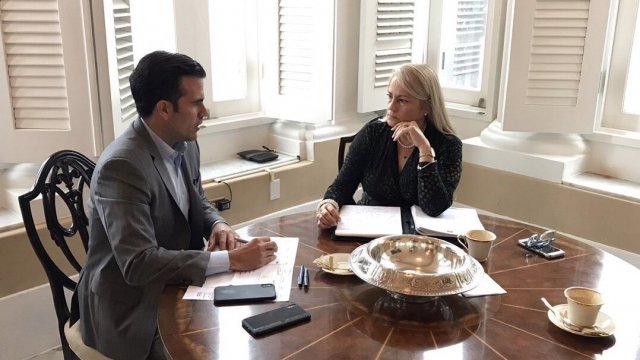 Puerto Ricans forced the hand of their governor to resign after nearly 900 pages of an offensive group chat he and a number of public officials were part of came to light. The chats included a number of misogynistic and homophobic messages.

But Puerto Ricans have maintained pressure as the question of who will replace departing Governor Ricardo Rosselló hangs.

She tweeted Sunday: "I reiterate, I have no interest in occupying the position of Governor. It is a Constitutional opinion. I hope that the Governor identifies and submits a candidate for the position of Secretary of State before August 2 and I have told him so."

The secretary of state is legally next in the line of succession, before Vázquez. But he resigned July 13 over the group chat scandal.

This is Francisco Pares Alicea. He's the secretary of treasury. Rosselló appointed him July 1.

Next is Julia Keleher, the now former secretary of education. She's caught up in another government scandal. The FBI arrested her and one other Puerto Rican official July 7 over an alleged corruption probe.

Which brings us to Secretary of Labor and Human Resources Briseida Torres Reyes. Rosselló appointed her in May.

San Juan Mayor Carmen Yulín Cruz is another person to keep in mind. Rosselló referred to her as the person who "could be shot and it'd be a favor."  The mayor reportedly has her eyes on next year's elections.

So far she's tweeted saying Justice Vázquez is "part of the corruption scheme," and retweeted a call for Puerto Ricans to continue protesting.