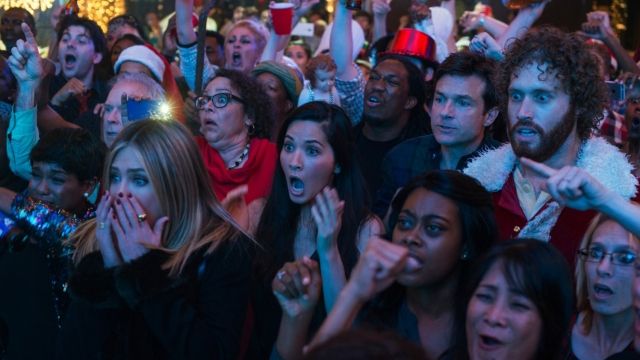 By Jamal Andress
December 11, 2016
Taking the No. 2 spot this week is the one movie all employed adults can relate to. "Office Christmas Party" brought in an estimated $17.5 million.
SHOW TRANSCRIPT

This one goes out to all the employees who have had one too many in front of their boss in honor of the holidays. While your boss may not appreciate your behavior, we most certainly do.

But before we get to that — the folks at Disney will not be handing over the movie theater reins anytime soon. Taking the No. 1 spot again this week is "Moana," bringing in an estimated $18.8 million in its third week out. That helps push the Pacific Island princess past $145 million at the domestic box office.

And offers a smooth transition of power for Disney's metaphorical Death Star when takes its aim at the box office next week.

Taking the No. 2 spot this week is the one movie all employed adults can relate to. "Office Christmas Party" brought in an estimated $17.5 million in its debut. That's pretty good for the very niche raunchy Christmas movie genre.

As for the quality of the film, critics say it's an opportunity missed. With all the talent on screen (i.e., Jason Bateman, Jennifer Aniston, Olivia Munn, T.J. Miller, Kate McKinnon, Courtney Vance, etc.), this had the potential to be the most hilarious film of 2016.

"'Office Christmas Party' all too often cuts away from the hilarious antics to move its plot forward," IGN's Naomi Kyle said.

Instead, the film just manages a 43 percent on the Tomatometer.

Taking the No. 3 spot this week is "Fantastic Beasts and Where To Find Them," bringing in an estimated $10.7 million.

As for next week, the box office force that is Disney's latest "Star Wars" film will be with all of us with the debut of "Rogue One: A Star Wars Story."