Off Balance: The Scooter Craze Is Too Fast For Safety Rules 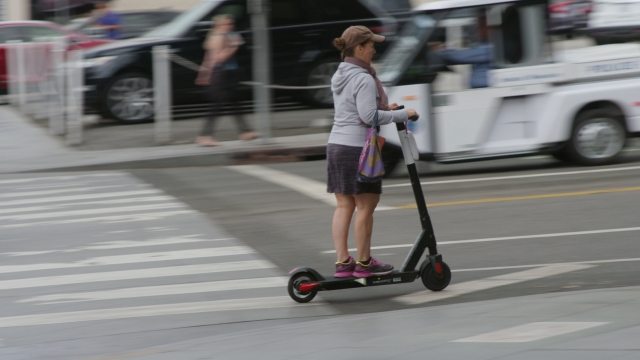 A Newsy investigation finds an unusual lack of national safety rules and industry standards for the popular standing electric scooters.

They detail more than 100 rental electric scooter rides gone bad in and around Santa Monica, the place where the nation's scooter revolution began two years ago.

Lerer pulls out photos of banged-up clients in hospital beds with chipped teeth, shattered bones and bandaged heads. Some of the cases are from user error or rough roads, but there also are riders who wiped out because of defects with the scooter itself, she said.

"The brakes are failing, the throttles stick," Lerer said. "By and large, the calls I get, it's people who've had surgery."

One of Lerer's clients, Holly Bittinger, says she tumbled off a scooter when she could not unstick the throttle off the accelerate mode.

"There was, like, a moment or two where I struggled to try to release it, and then I fell," Bittinger said.She broke her wrist in five places.

A Newsy investigation discovered a lack of safety rules and standards for the design and manufacture of electric scooters.

Regulators are struggling to keep pace with the rapid deployment of rental scooters. By the end of last year, there were 85,000 scooters rolling on the roads of more than 100 cities.

Scooter companies are determining for themselves what makes a safe device, not bound yet by government or industry standards for how they should be designed aside from federal rules for the battery.

As a result, riders will encounter an array of scooters with different systems for the brakes, lights, handlebar stems and other hardware.

Some of the scooters available for rent were never meant for the road in the first place. Segway, maker of the popular Ninebot KickScooter ES series, has this warning in the user manual: "Under no circumstance should you ride on roads with motor vehicles."

The U.S. Consumer Product Safety Commission is the sole federal agency with the power to create safety standards for scooters. It also can require product testing, with authority to recall or ban models deemed unfit for the road.

The CPSC has pages of safety rules for bicycles, but nothing yet for electric scooters. There are voluntary industry standards for scooters by ASTM International, but they are explicitly for powered scooters designed for children.

The CPSC told Newsy it's reviewing accident injury cases to determine whether there are any widespread defects contributing to accidents that would require at least working with ASTM to develop voluntary safety standards.

That takes time, CPSC spokesman Joseph Martyak said."We're in the process of working out what's going on with these issues and to find out what's causing them," Martyak said. "Rest assured, we are talking about this issue broadly in the field."The CPSC has posted scooter safety messages on social media urging riders to wear a helmet and follow traffic laws.

The agency has a webpage titled "scooter safety," but it's blank.

Paul Steely White, safety policy director at Bird, said he welcomes industry standards."Regulators have to be there and they have to catch up," White said. "As a safe, responsible operator, we win when the bar is set high for safety, so we want that."White said Bird is phasing out its use of the Ninebot Kickscooter ES series not built for sharing the road with traffic, moving to newer models designed for the company that have better lighting and braking.Outside Washington, states and cities are writing their own limited scooter safety rules.Santa Monica requires scooters to be "highly durable" and safe.

"We do actually spot-check every month a section of each operator's devices to see where there might be some deficiencies," said Francie Stefan, acting chief mobility officer for the city of Santa Monica.Records requested by Newsy show EMS in Santa Monica responds to an average of one scooter-related call a week, with about 38% of the injuries involving the rider's head.Stefan said car crashes still account for a much larger share of transportation injuries in the city.

"Do people have to be careful on the roadways? Yes. Do they need to be careful on these devices just like they were walking or bicycling or driving? Absolutely," Stefan said.Santa Monica is nearing the end of a 16-month pilot program for scooters, soliciting feedback from the public before the City Council considers whether to allow the devices on the streets permanently.The devices are now so popular they can be difficult to find during rush hour. They cut in half Kait Trujillo's commute to a gym downtown where she works as a personal trainer.

"If I take the scooter from my house, it's, like, eight minutes. Driving takes, like, 15 minutes," she said. "If you're in a bike lane and aware of your surroundings, it doesn't impose any risks. I mean, everything imposes risks."Holly Bittinger, still awaiting removal of a plate to help her wrist heal from her scooter crash, says they are no longer an option for her."I'm just done with the scooters," she said. "It was too traumatic. I don't think I can ever do it again."

More from Off Balance

National Scooter Safety Standards Are In The Works

Durability and rider safety will be the focus of new national electric scooter standards under consideration by ASTM International.