Oceans Could Hold More Plastic Than Fish By 2050, Report Says 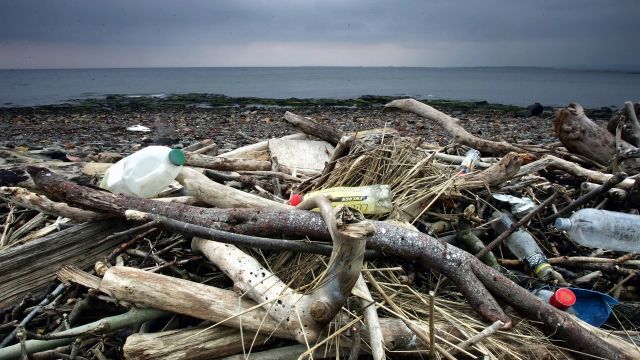 SMS
Oceans Could Hold More Plastic Than Fish By 2050, Report Says
By Grant Suneson
By Grant Suneson
January 20, 2016
A new report claims if the rate of plastic pollution in oceans continues to increase, plastic garbage could outweigh fish by 2050.
SHOW TRANSCRIPT

We’ve all heard the expression there’s plenty of fish in the sea. But a new report says those fish could soon be outnumbered by plastic garbage.

The Ellen MacArthur Foundation released a report saying if the amount of plastic in the world’s oceans continues to increase, there will be more pounds of plastic than there are pounds of fish in the ocean by 2050.

Currently, it’s estimated almost nine million tons of plastic wind up in the ocean per year, which the foundation says "is equivalent to dumping the contents of one garbage truck into the ocean every minute. If no action is taken, this is expected to increase to two per minute by 2030 and four per minute by 2050."

All that trash in the water is a big problem for marine life. Studies have shown most sea turtles and nearly all marine birds on the planet have at least some traces of plastic in their stomachs.

The Ellen MacArthur Foundation report says this is likely because only 5 percent of plastic is recycled, compared to 58 percent of paper. In addition to polluting the ocean, all that lost plastic drains an estimated 80 to 120 billion dollars from the economy every year.

But economic challenges can make it hard to convince companies that use large amounts of plastic. With oil hovering at an inexpensive $30 a barrel, it’s cheaper to make new plastic than to recycle and process old plastic products.

Despite the less-than-encouraging numbers, the report says it's possible to cut down on oceanic waste. It encouraged scientists to develop new types of plastics that are more easily recycled and encouraged governments to incentivize corporations to put an emphasis on sustainability.