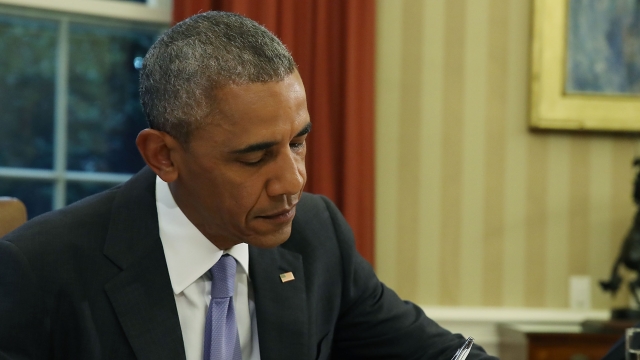 Barack Obama became the first sitting president to publish an academic paper. He wrote about his signature legislation, the Affordable Care Act.

Barack Obama's list of accomplishments keeps growing. He's the 44th president of the United States, a Nobel Peace Prize winner and now a published author in a scientific journal.

This week, Obama authored a study in the Journal of the American Medical Association. The paper focused on his defining legislation: the Affordable Care Act, or Obamacare.

He extolled the positive impact Obamacare's had on the country, saying it's "made significant progress toward solving long-standing challenges facing the U.S. health care system related to access, affordability, and quality of care."

That makes him the first sitting president to publish an academic paper, though it's not like Obama was in the White House taking surveys himself.

SEE MORE: Opioid Addiction Medication Gets A Boost From The Obama Administration

The paper is known as a "special communication," which means it wasn't peer-reviewed the same way another paper would have been.

But that doesn't mean Obama got special treatment. Turns out it's not easy to get a paper published, even if you're president. The article was revised twice and edited over the course of two months.

JAMA's Editor-in-Chief Howard Bauchner said, "While we of course recognized the author is the president of the United States, JAMA has enormously high standards and we certainly expected the president to meet those standards."

This video includes clips from The White House and images from Getty Images. Music provided courtesy of APM Music.