Obama Commutes 61 Prison Sentences To Catch Up On Reform Backlog 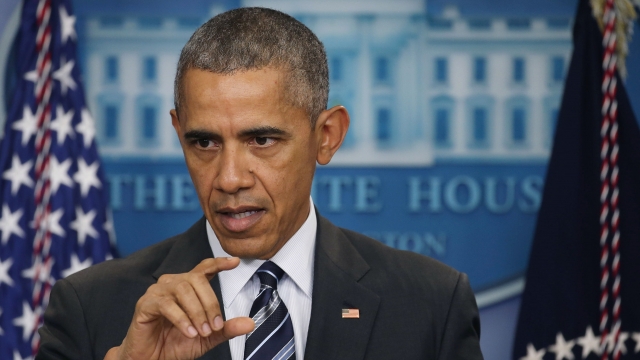 As part of his push for criminal justice reform, President Obama is granting clemency to 61 federal prisoners.

The White House announced the move Wednesday, as Obama met with a group of ex-prisoners who have already had their sentences commuted. The president said the commuted prisoners were serving "the kind of outdated sentences that are clogging up our jails and burning through our tax dollars."

Most of those prisoners are incarcerated for nonviolent drug possession or distribution offenses and are serving sentences which would be dramatically shorter if they were convicted under today's drug laws. Twenty-one of those prisoners were handed life sentences.

In total, the Obama administration has commuted the sentences of 248 prisoners, which the White House notes is more than the last six administrations combined. That's probably because previous administrations preferred to outright pardon offenders rather than commute their sentences.

And those numbers are dwarfed by the amount of pending applications filed with the U.S. Justice Department. The clemency initiative Obama announced in 2014 has been bogged down with red tape and is facing a severe backlog of cases.

Obama has promised to ramp up his clemency efforts in the remaining months of his term, but he's also calling for structural reforms to sentencing laws. The U.S. Sentencing Commission already reduced federal sentencing rules for drug offenders in 2014; a bill which would significantly overhaul those rules is languishing in Congress.

This video includes clips from the White House and the U.S. Department of Justice.