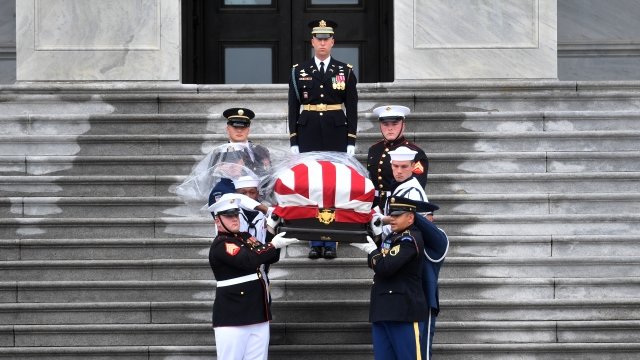 The service took place at the Washington National Cathedral. Former Presidents Barack Obama and George W. Bush both spoke at the service.

"On the surface, John and I could not have been more different. ... But for all our differences, for all the times we sparred, I never tried to hide — and, I think John came to understand — the longstanding admiration I had for him," Obama said.

Bush said: "Back in the day, he could frustrate me. And I know he'd say the same thing about me. But he also made me better. In recent years, we sometimes talk of that intense period like football players remembering a big game. In the process, rivalry melted away. ... He loved freedom with the passion of a man who knew its absence. He respected the dignity inherent in every life, a dignity that does not stop at borders and cannot be erased by dictators."

Sens. Joe Lieberman and Lindsey Graham also spoke at the ceremony, as well as members of McCain's family.

McCain will be laid to rest Sunday at the U.S. Naval Academy.