Obama: Donald Trump "Is A Symptom. Not A Cause." 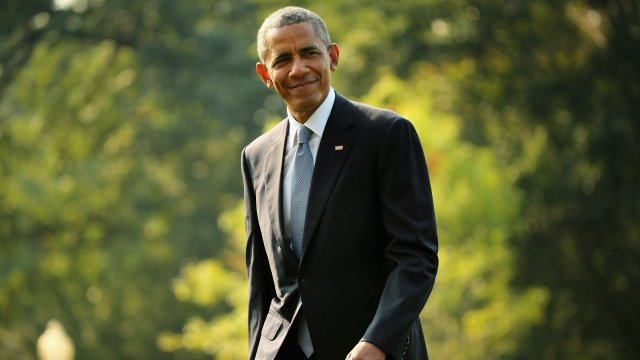 The former president returned to the spotlight after a political hiatus that has annoyed many Democrats in Congress.

Former President Barack Obama ended a longstanding tradition of not critiquing presidential successors Friday at a speech at the University of Illinois.

The 44th president had talked about the current political landscape before, but this was the first time he actually named Donald Trump when talking about him. And he did it after saying people with power and privilege often manufacture fear to keep the country divided, angry and cynical because it helps them maintain status quo.

"It did not start with Donald Trump. He is a symptom, not the cause."

The former president acknowledged he was breaking tradition and justified it with a history lesson dating back to George Washington. At the crux, it boiled down to --

“A glance at recent headlines should tell you that this moment really is different."

He critiqued conservatives who he said seem “unwilling to find a backbone.”

“The politics of division and resentment and paranoia has unfortunately found a home in the Republican party.”

At one point, he seemed taken aback at Trump's response to the events in Charlottesville last year, asking the audience,

“How hard can that be, saying Nazis are bad?”

He critiqued progressive liberals of wanting to fight fire with fire.

“Common ground is out there.”

This speech will be the first of many between now and November. He'll be stumping for congressional candidates in California and a gubernatorial Democrat in Ohio.

He said the biggest threats to democracy are indifference and cynicism.

"You need to vote because our democracy depends on it."

Andrea Gonzales is from Michigan. She graduated from the University of Missouri's journalism school in 2016. She has been employed by many media companies. When her liver started to fail, she started making a film (which is now in the final stages of production). She enjoys being healthy -- and helping communities be healthy too. Her cat's name is Precious. @AndreaGonz_