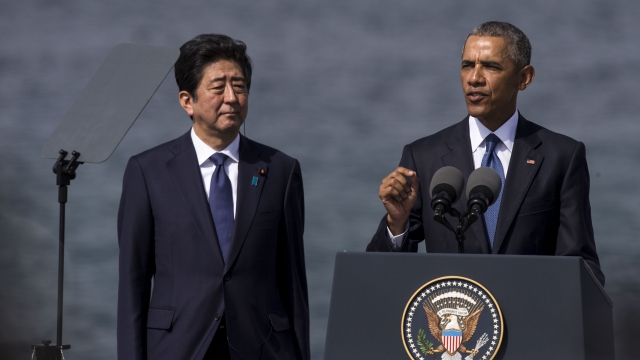 Japanese Prime Minister Shinzo Abe and President Barack Obama visited Pearl Harbor Tuesday. They urged the world to look at the example the two nations have set since the end of World War II.

"Even today, the horrors of war have not been eradicated from the surface of the world. There is no end to the spiral where hatred creates hatred. The world needs the spirit of tolerance and the power of reconciliation now — and especially now," Abe said.

Obama told the crowd gathered across from the memorial, "After one of the most horrific chapters in human history — one that took not tens of thousands but tens of millions of lives with ferocious fighting across this ocean — the United States and Japan chose friendship, and they chose peace."

The two spoke after laying wreaths at the USS Arizona Memorial and throwing flowers into the harbor.

Abe is the first sitting Japanese prime minister to visit the site in about 60 years. And he's the first to visit alongside a sitting U.S. president.

"I offer my sincere and everlasting condolences to the souls of those who lost their lives here ... . We must never repeat the horrors of war again. This is the solemn vow we, the people of Japan, have taken," Abe said.

Abe stopped short of offering an apology for the attack. President Obama took that same approach when he visited the Hiroshima Peace Memorial earlier this year.

Over 2,400 people were killed in the attack on Pearl Harbor on Dec. 7, 1941. The attack propelled the U.S. into World War II. Japan officially surrendered on Sept. 2, 1945 — just less than a month after the U.S. dropped atomic bombs on Hiroshima and Nagasaki, initially killing over 120,000 people and leaving a lasting impact on survivors that is still being studied.