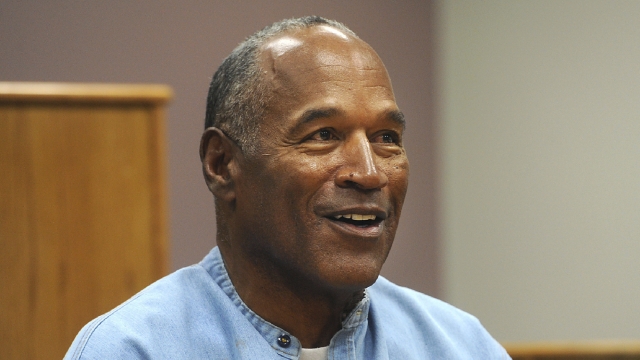 O.J. Simpson is a free man.

Simpson declined an immediate interview, LaVergne said, and the attorney declined to talk about Simpson's future plans, including whether he intends to remain in Nevada.

Simpson had told parole officials before his Oct. 1, 2017, release from prison that he planned to move to Florida.

He instead moved to a gated community in Las Vegas, where he plays golf and frequently takes to Twitter to offer opinions about college and pro sports, especially football.

"Life is fine," he told The Associated Press during a June 2019 interview.

Simpson's saga makes him, in the words of one of his Las Vegas trial lawyers, one of the most famous people on the planet.

He grew up in public housing in San Francisco, attended the University of Southern California and won the Heisman Trophy as college football's best player in 1968. He became an NFL Hall of Famer and the first running back to gain 2,000 yards in a season with the Buffalo Bills in 1973. He acted in movies and served as a rent-a-car company pitchman and a football commentator.

In what became known as "The Trial of the Century," he was acquitted in 1995 of the double slayings of his ex-wife, Nicole Brown Simpson, and her friend Ronald Goldman.

The trial was the focus of gavel-to-gavel TV coverage, with Simpson represented by a legal "Dream Team" that included the late Johnnie Cochran Jr. and F. Lee Bailey.

In a separate case more than a decade later, Simpson was convicted by a jury in Las Vegas and sentenced to prison for leading five men, including two with guns, in a 2007 confrontation with two sports collectibles dealers in a cramped room at an off-strip Las Vegas casino hotel.

Simpson insisted he only wanted to retrieve personal mementos and items stolen from him following his acquittal in the double killings.

He had been found liable for the deaths in 1997 by a California civil court jury that ordered him to pay $33.5 million to victims' families.

His original parole discharge date was Sept. 29, 2022. By last summer, that date had been moved up for good behavior to Feb. 9. The Nevada Board of Parole majority that ultimately granted his early discharge after a Nov. 30 hearing cut his term by about three more months for good behavior.

While on parole, in 2019, Simpson sued a Las Vegas Strip resort that banned him two years earlier. He alleged unnamed employees defamed him by telling a celebrity news site he had been drunk, disruptive and unruly.

The Cosmopolitan of Las Vegas argued Simpson couldn't be defamed because his reputation was already tarnished by his criminal and civil trials, and by his conviction and imprisonment in Nevada.

The two sides reached a March 31 out-of-court settlement for terms that neither disclosed.

LaVergne said in June that Simpson also would continue to fight court orders that he owes at least $60 million in judgments stemming from the 1994 killings.