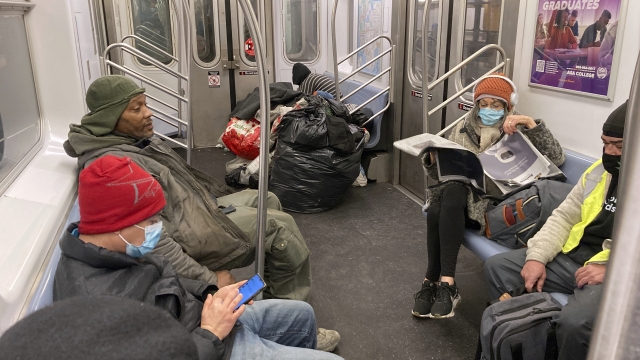 SMS
NYC Subway Shooting Points To Growing Violent Crime In U.S. Transit
By Jamal Andress
By Jamal Andress
April 15, 2022
A rise in crime is hitting mass transit systems in multiple cities. Experts say a lack of ridership could be partly to blame.

"In my heart, this is a terrorizing action to put fear in the hearts of New Yorkers, but they don't know who they're messing with," said Gov. Kathy Hochul.

As many cities across the country, big and small, deal with a rise in gun violence, one man opened fire on a New York City subway car, hitting 10 people.

It adds to a growing perception in many big urban cities that riding mass transit just isn't safe anymore.

Gil Kerlikowske is a former police chief for Seattle and Buffalo, New York and is on the board of directors for the Council on Criminal Justice.

"Mass transit is the most vulnerable of our transit systems," Kerlikowske said. "So whether it's buses, or the subway, or the metro, et cetera — mass transit doesn't really have that level of security that we're used to at an airport."

According to the Manhattan Institute, violent felonies on the New York City subway doubled between 2019 and the end of 2021, spiking in April of 2020 to nearly six violent felonies per million rides.

A similar rise has been documented in Chicago, where data shows violent crime on CTA trains is up 17% in 2022 compared to last year. In Los Angeles, the Los Angeles Times reports that violent crime on the Metro system climbed 36% last year. Aggravated assaults, rapes and homicides rose for the second year in a row.

Experts say a big reason for the jump is the lack of ridership, removing the 'safety in numbers' phenomenon.

In New York City, when ridership abruptly dropped in March of 2020 below 20 million riders, the per-rider risk of violent felonies peaked in April.

“It's so open, I mean, it's so incredibly open," Kerlikowske said. "You could either jump a turnstile or put a token. You know, I've used transit in many cities, many ways, it's very difficult to police."

It’s important to mention these are still incredibly low numbers. In 2021, there were seven subway murders in New York, placing the chance of becoming a murder victim at 0.7 per 100,000 people.

But Kerlikowske says for city officials, that’s not going to be enough.

"No politician is going to be able to go out and say, 'Well, you know, even though this happened and it's terrible, you know, your chances of being assaulted, murdered, robbed, attacked, et cetera, are still very minimal,'" Kerlikowske said. "People don't want to hear statistics; they want to feel it when they get on the subway."

In February, following a string of subway violence, Adams released a 'Subway Safety Plan' focused on housing homeless New Yorkers and adding more law enforcement to the subway lines. He noted the influx of officers didn't necessarily mean an influx of arrests and incarceration.