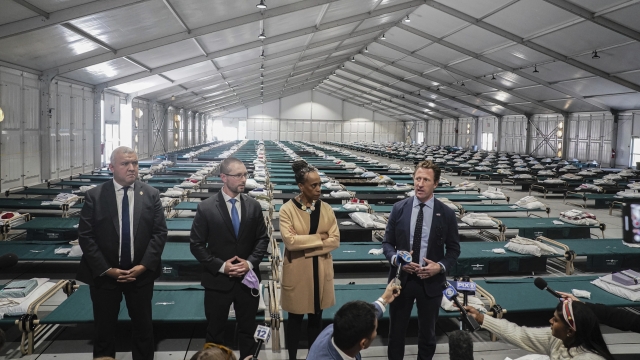 The camp includes bathrooms, showers, a laundry facility, and isolation tents for those who test positive for COVID-19.

"This is a historic moment, we haven't seen something like this in New York City for nearly a century," said Mayor's Office of Immigrant Affairs Commissioner Manuel Castro.

After criticism and a number of controversies, the city unveiled the interior of its first makeshift relief center, that's intended to house hundreds of asylum seekers sent here from other states.

They've created a cafeteria area inside the tents where all the migrants are expected to receive their meals each day. The Mayor's Office has told Newsy that the tents will initially be equipped to house at least 500 migrants. But they have an extra tent in case they need to expand. The six and a half acre facility will temporarily shelter single men. Each migrant will receive a camp bed with a sheet set, towel and pillow. The center is located on Randall's Island, at the Harlem River's Edge, 3.8 miles from Times Square, Manhattan.

Chris Romine lives on the island. His parents immigrated from Venezuela years ago. He said the center's location isn't safe for the migrants.

"It's horrific. This is a park I walk thoroughly everyday," said Romine. "I know those grounds well, I've been here for five years. It collects water — rainwater runs down the hill. Of all places for them to build a migrant tent, to choose there it's pretty irresponsible and inhumane."

In August, U.S. Customs and Border Protection stopped more than 25,000 people from Venezuela at the southern border — a 43% monthly increase.

However, city officials said the shelter is winterized and rainwater won't be a problem.

Zachary Iscol, is the NYC Commissioner of the Emergency Management Department.

"You've seen the structures. They can withstand 90 mile per hour winds. They are used all over the country in every climate and place, winter weather," said Iscol.

The facility has a recreation center equipped with TV's, Xbox game consoles, table games and phones to make international calls. There are bathrooms, showers, a laundry facility and isolation tents for those who test positive for COVID-19. Initially, Mayor Eric Adams said the camp would be built in an Orchard Beach parking lot in the Bronx. But construction was stopped after heavy rains flooded the site.

New York City is looking for help from the federal government to cover the cost.

The city says 90% of the staff speaks Spanish, and all were hired throughout New York City. There will be 24 hour security and hourly bus service to and from Manhattan.

At the tents, the migrants will get help locating their family members or friends and finding long term shelter.

There will be a 10 P.M. curfew but city officials were not clear on the consequences of breaking that rule.