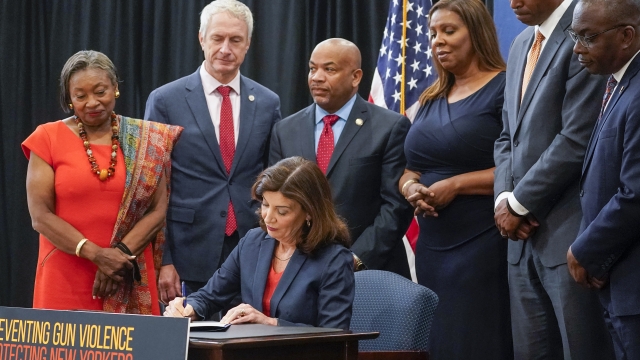 While Congress is wrestling with gun reform laws, more limited in scope  — New York is going all in.

"There is more to do," she said. "Thoughts and prayers won't fix this but taking strong action will and we'll do that in the name of the lives that have been lost."

"My office we will be ready to defend these laws against any challenges because the Second Amendment... to all those who would think, all of those drunk with power, who think that they will challenge these laws, let me tell you that the Second Amendment is not absolute," New York Attorney General Letitia James said.

The new laws may soon be undercut by the U.S. Supreme Court. Justices are set to release an opinion on New York’s law preventing concealed carrying of guns without a permit. But New York isn't the only state tightening gun laws. Legislatures in California, Delaware and New Jersey are all putting various measures to a vote.

"I am also hoping that it will send a message to states all across this nation, to the lawmakers in Washington, that enough is enough. And the time for real, sensible gun reform at the federal level is now," Buffalo Mayor Byron Brown said.

Historically, change after mass shootings has happened on the state level. In the wake of the Parkland school shooting, Republican-led Florida enacted red flag laws. Texas, on the other hand, has loosened laws after several mass shootings in the state.

"People who think, 'Maybe if we can just implement tougher gun laws, it's gonna solve it.' Chicago and LA and New York disprove that thesis," Texas Gov. Greg Abbott said. "And so if you’re looking for a real solution Chicago teaches that what you’re talking about is not a real solution."

Advocates point out that state-by-state laws only do so much. While New York's laws are strengthening, in neighboring Pennsylvania, the Republican-led legislature is focused on loosening gun restrictions.

"We are recognizing the shortfalls and the shortcomings of our federal government. On the state level, we can do a lot more," she said. "We're very close to Pennsylvania. There are lots of state races that we can all get involved in to help to flip seats."