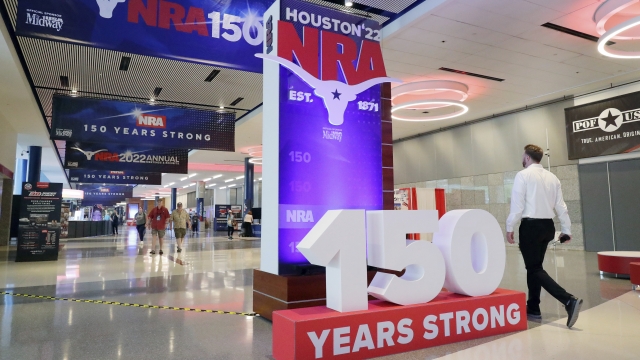 The National Rifle Association begins its annual convention in Houston on Friday, and leaders of the powerful gun rights lobbying group are gearing up to “reflect on” — and deflect any blame for — the deadly shooting earlier this week of 19 children and two teachers at an elementary school in Uvalde, Texas.

Former President Donald Trump and other leading Republicans are scheduled to address the three-day firearms marketing and advocacy event, which is expected to draw protesters fed up with gun violence.

Some scheduled speakers and performers have backed out, including two Texas lawmakers and “American Pie” singer Don McLean, who said “it would be disrespectful” to go ahead with his act in the aftermath of the country’s latest mass shooting.

While President Joe Biden and Democrats in Congress have renewed calls for stricter gun laws, NRA board member Phil Journey said the focus should be on better mental health care and trying to prevent gun violence. He said he wouldn't support banning or limiting access to firearms.

The NRA said in an online statement that people attending the gun show will “reflect on” the Uvalde school shooting, “pray for the victims, recognize our patriotic members, and pledge to redouble our commitment to making our schools secure.”

People planning to attend picked up registration badges Thursday and shopped for NRA souvenirs, such as T-shirts that say “Suns Out Guns Out.” Police already had set up metal barriers across the street from the convention center, at a park where protesters are expected to gather Friday.

Texas has experienced a series of mass shootings in recent years. During that time, the Republican-led Legislature and governor have relaxed gun laws.

There is precedent for the NRA to gather amid local mourning and controversy. The organization went ahead with a shortened version of its 1999 meeting in Denver roughly a week after the deadly shooting at Columbine High School in Colorado. Actor Charlton Heston, the NRA president at that time, told attendees that “horrible acts” shouldn’t become opportunities to limit constitutional rights and he denounced critics for casting NRA members as “villains.”

Rocky Marshall, a former NRA board member, said that although the tragedy in Uvalde “does put the meeting in a bad light,” that's not a reason to cancel it. Marshall said gun rights advocates and opponents can perhaps reduce gun violence if they focus on factors such as mental illness or school security.

Two Republican Texas lawmakers who had been scheduled to speak Friday — U.S. Sen. John Cornyn and U.S. Rep. Dan Crenshaw — are no longer attending due to what their staffs said were changes in their schedules.

Texas Gov. Greg Abbott, who was slated to attend, will instead address the convention by prerecorded video, his spokesman told The Dallas Morning News.

Republican Sen. Ted Cruz of Texas was listed as a speaker, and Trump said Wednesday that he still intends to attend. South Dakota Gov. Kristi Noem, a Republican, also is sticking to her plans to speak Friday at the NRA event.

Several groups have said they planned to stage protests outside the convention center.