NRA Canceling Events, Laying Off Workers Due To Pandemic 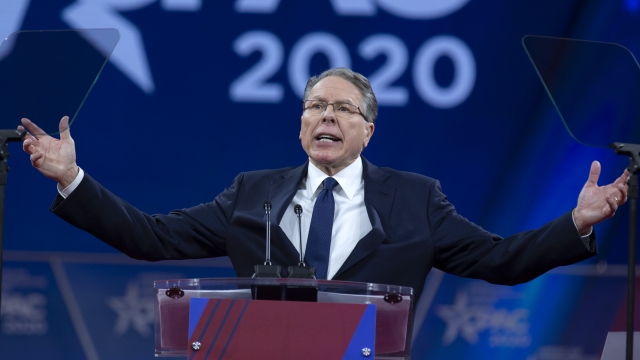 SMS
NRA Canceling Events, Laying Off Workers Due To Pandemic
By Bailey Vogt
By Bailey Vogt
May 4, 2020
The organization was also forced to shut down several events — including its national convention.
SHOW TRANSCRIPT

The National Rifle Association is laying off workers and canceling its major events as the coronavirus dulls what would normally be a crucial year for the guns rights organization.

The NRA is furloughing some employees while subjugating others to four-day work weeks and pay cuts, CEO Wayne LaPierre said in a memo to staff. LaPierre, who also took a pay cut, said these changes would be temporary.

The roughly 5 million member organization was forced to shut down several events that would typically lead up to a presidential election — the biggest of which being its national convention. Considering it is likely President Trump would have paid a visit, it is unknown how much pull the NRA will have on this year's presidential race.

The NRA's financial problems and event cancellations follow an already difficult time. The organization has been engaged in several legal challenges against government regulators and its former marketing agency. It's also faced pressure as the public's desire for stricter gun laws increases.

The pandemic hasn't stopped the NRA's lawsuits, however, as it sued New York last week and California officials in March for deeming gun stores "nonessential businesses" during the pandemic.