'Not My President's Day' Rallies Held Across The US 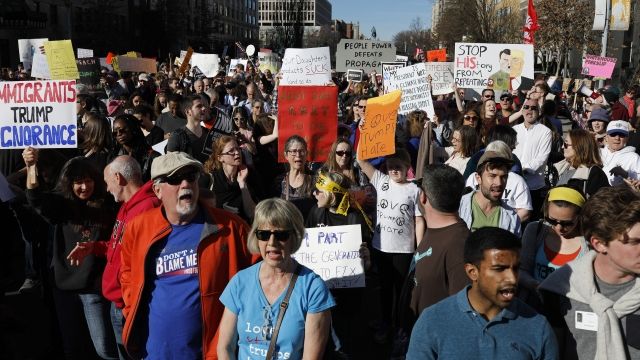 The original protest was organized as a way to speak out against President Trump's policies, but it grew to encompass a number of issues.

Thousands across the country spent their Presidents Day protesting.

So-called "Not My President's Day" rallies were held in over two dozen cities Monday.

The original rally took place in Los Angeles to speak out against President Trump's policies.

It grew to include cities like New York, Chicago and Washington, D.C. The protests encompassed a number of issues, including the construction of the Dakota Access Pipeline to the Black Lives Matter movement.

In Georgia — a state known for its peaches — protesters gathered for what they called the ImPEACH NOW! rally. They called for Trump's — you guessed it — impeachment.

Protesters said they participated for a number of different reasons.

A woman protesting in Los Angeles said, "I pay my taxes, and I want the people to see his taxes. That's what really pushed me over the edge."

"This march isn't about a specific policy or specific thing that Donald Trump has done. It's just a way to unite people from all different backgrounds and communities and give themselves a voice," one of the organizers of the protest in Washington, D.C. said.

"I expect even more Americans will get energized to keep a close eye on the president and the policies and help protect America and keep it great," a man demonstrating in Los Angeles said.

Trump Surprised A 'Yuge' Fan At His Florida Rally

Donald Trump invited a super fan on stage at his Florida rally — much to the surprise of the Secret Service and the fan himself.

Other people took the opportunity to express their support for Trump.

"I am an American by choice. And this land that opened arms to you — this is the land you've got to take care of," a woman yelled at the crowd gathered in New York.

The latest round of protests came just a day after thousands gathered in New York for the "I Am a Muslim Too" rally.

The purpose of that rally was to stand in solidarity with American Muslims.