'Medicare For All' Has Some Big-Name Backers — And Democratic Skeptics 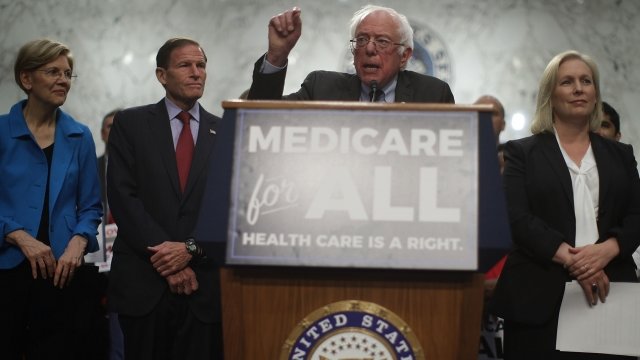 For years now, Sen. Bernie Sanders has pushed what he calls a "Medicare-for-all" system pretty much by himself. But this time, he's bringing some big-name friends along.

Fifteen, to be exact. His new single-payer health care proposal has major co-sponsors, like Sens. Elizabeth Warren, Cory Booker, Kamala Harris and Kirsten Gillibrand — not to mention his very strong and active base. But there are some notable absences, including the majority of the Democratic leadership.

Senate Minority Leader Chuck Schumer has only said he would be taking a peek at the "many good" proposals coming from the left. And House Minority Leader Nancy Pelosi dodged backing Sanders' bill by saying she's focused on protecting and strengthening the Affordable Care Act right now.

Democrats who are up for tough re-election battles next year are also largely steering clear. Missouri Sen. Claire McCaskill, for example, said implementing single-payer system nationwide would have "a lot of problems."

Under Sanders' plan, we'd all get what he calls a "Universal Medicare" card. It would cover almost everything, including hospital stays, substance abuse treatment, dental visits and abortions. Patients could choose their hospitals, health care providers and doctors.

And Sanders' plan isn't only popular with some on the left; it's also trending up nationwide. A survey in July found 53 percent of Americans polled were in favor of single-payer. That's up from 50 percent just last year.

But the price for Sanders' plan, both monetarily and politically, are huge. This plan doesn't have a cost estimate yet, but what he proposed during the election was priced at $1.4 trillion. To pay for it, there was a proposed 2.2 percent tax increase on everyone, and the wealthy would pay even more.

This bill isn't going anywhere for now; the left has no real power to get any bill through Congress. But it does signal to progressives that Democrats in Congress are shifting further left. And the next time they take power in Washington, single-payer will likely be at the top of the agenda.