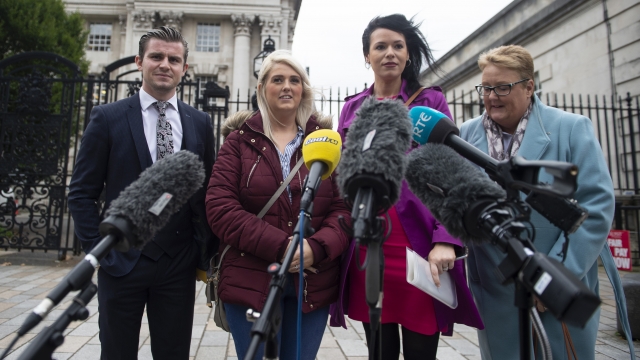 SMS
Northern Ireland Abortion Ban Found To Violate Human Rights Standards
By LeeAnne Lowry
By LeeAnne Lowry
October 4, 2019
A woman challenged the law six years ago after she was denied an abortion even though a scan showed the fetus wouldn't survive.
SHOW TRANSCRIPT

Northern Ireland is part of the U.K. and has the country's most restrictive abortion rules; abortions are only legal if the life or mental health of the woman is at risk.

A woman challenged the law six years ago after she was denied an abortion even though a scan showed the fetus wouldn't survive.

While the court sided with the woman on Thursday, the judge said she won't formally declare it incompatible with the European Convention on Human Rights yet because abortion might be decriminalized in the province anyway.

That means Northern Ireland's power-sharing coalition could work out differences by the Oct. 21 deadline, eliminating the need for the bill. But that's unlikely since one of the parties supports the abortion legislation.

Northern Ireland hasn't had a government since 2017. If the two sides of its power-sharing coalition can't restore the assembly by the deadline, the new funding bill will go to the House of Lords and abortion will likely be decriminalized.