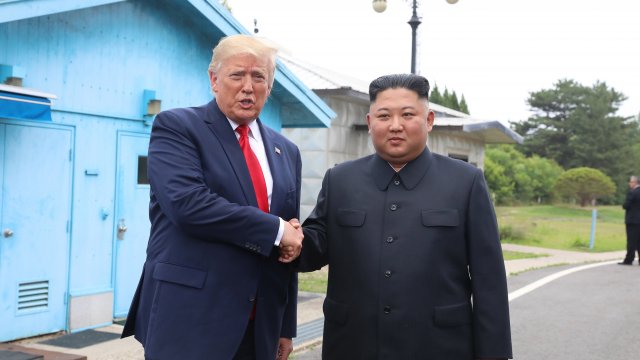 As denuclearization talks between North Korea and the U.S. remain at a standstill, Pyongyang warned Washington could receive an unwanted "Christmas gift" if it doesn't ease up on its demands.

North Korea's vice foreign minister in charge of U.S. affairs made the subtle threat in a statement to the state-run Korean Central News Agency.

He said the "year-end time limit the DPRK set for the U.S." is getting closer. He accused Washington of trying to buy time and draw out negotiations for its own political benefit ahead of next year's election.

He added: "What is left to be done now is the U.S. option and it is entirely up to the U.S. what Christmas gift it will select to get."

Negotiations between the two countries have broken down significantly ever since President Donald Trump and Kim Jong-un's Vietnam summit earlier this year. It ultimately ended with the two leaders unable to agree on steps toward denuclearization and lifting U.S. sanctions.

Kim set a deadline for the end of the year for the U.S. to soften its stance so they can come to an agreement, but Washington has dismissed that timeline.