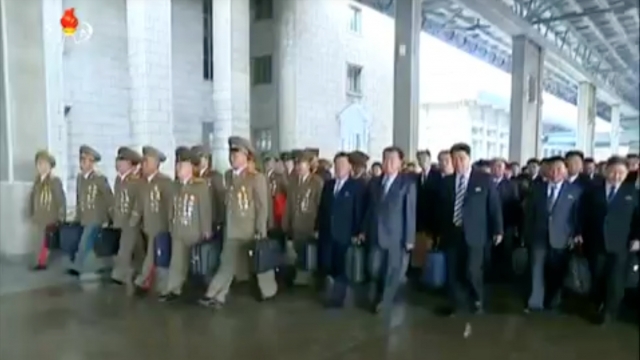 SMS
North Korea's About To Throw Its Biggest Political Bash In 35 Years
By Matt Picht
By Matt Picht
May 5, 2016
The seventh Workers' Party Congress gives North Korean leader Kim Jong-un a chance to flex his political might.
SHOW TRANSCRIPT

For the past 70 days, North Korea has been working overtime to prepare Pyongyang for the seventh Workers' Party Congress, a massive gathering of party politicians, which ostensibly sets the country's political agenda.

There hasn't been a meeting like this in over 35 years. The country's leadership has changed hands twice since the last meeting in 1980. Now, North Korean leader Kim Jong-un is eager to host a massive show of strength and consolidate political power under him.

To that end, the country's government has imposed harsh controls on its citizens. The so-called "70-day-struggle" features seven-day workweeks, increased government surveillance and restrictions on free movement.

Kim's regime has also been ramping up military activities ahead of the congress, conducting nuclear tests and missile launches. If the government is aiming for a display of military might, we could see another nuclear test during the meeting.

On the other hand, the country's saber-rattling has led to international sanctions, which have eroded North Korea's slow economic recovery. It's equally likely Kim will choose to focus on economic development during the congress — which would be a major relief to the country's lone ally, China.