North Korea Says Missiles Were A Warning To U.S. And South Korea 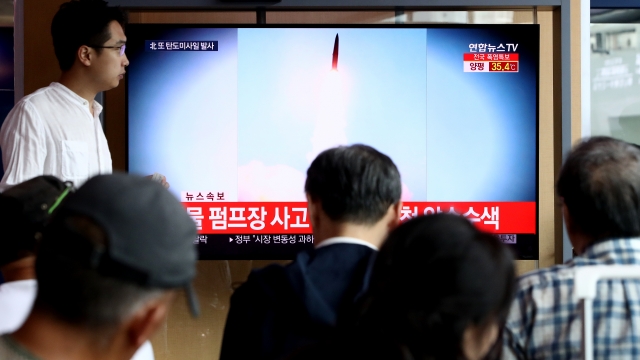 North Korean leader Kim Jong-un said his country's launch of two missiles Tuesday was a warning to the U.S. and South Korea over their joint military drills. That's according to North Korean state media.

North Korea's Foreign Ministry slammed those drills as "an undisguised denial and a flagrant violation" of promises President Donald Trump made to Kim during their 2018 denuclearization talks.

That same day, North Korea fired what are believed to be short-range ballistic missiles from a southwestern province. Both landed in the Sea of Japan.

U.S. Defense Secretary Mark Esper, who's traveling overseas this week in the region, told reporters Tuesday the U.S. is monitoring the situation closely.

Esper said: "I think the key is to keep the door open for diplomacy. The president had a good meeting last month or so with President Kim Jong-un, and we're not going to overreact to these but we monitor them, we watch them closely, and we're cognizant of what's happening."

Earlier this year, the U.S. and South Korea announced they'd no longer hold their two annual large-scale joint military drills. Instead, they'd carry out a couple of smaller operations. But no matter the size, North Korea's not a fan of the exercises, citing them as a reason it needs to have a nuclear arsenal.