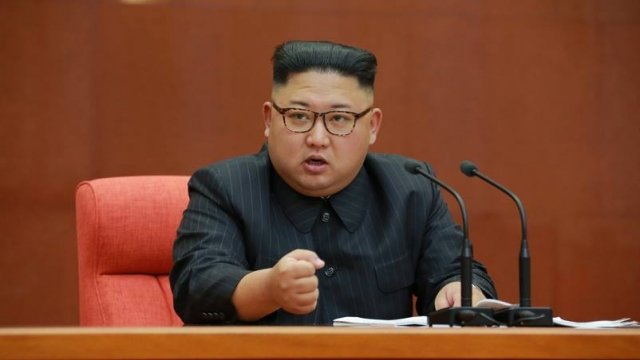 SMS
North Korea Has A Long History Of Deals With The US To Denuclearize
By Jake Jones
By Jake Jones
March 8, 2018
Multiple U.S. administrations have struck agreements with previous North Korean leaders to denuclearize the peninsula.
SHOW TRANSCRIPT

Kim Jong-un's invitation to meet President Donald Trump is a groundbreaker — sitting leaders from the United States and North Korea have never met before.

But North Korea watchers have seen this dog and pony show before – North Korea has repeatedly dangled the idea of denuclearization in exchange for international aid and an easing of tensions, only to go back on its commitments. Here's a quick look:

North Korea started working on its nuclear weapons program in the 1980s. In '85, it joined the Nuclear Non-Proliferation Treaty, or NPT, thanks to Soviet pressure. But then-leader Kim Il-sung wouldn't agree to inspections unless the U.S. removed its own nuclear weapons from South Korea.

In 1991, President George H. W. Bush agreed to remove those nukes; the following year, the two Koreas signed a denuclearization agreement, and the North agreed to inspections.

The next few years saw some hiccups in inspections and North Korea adhering to its agreements. Then Kim Il-sung died in 1994 and was succeeded by his son Kim Jong-il. He said his country, once again, would freeze its nuclear weapons program in exchange for normalized relations, U.S. fuel and help making two of its nuclear reactors proliferation-resistant.

But that deal didn't go very well, and at the end of 2002, North Korea kicked out inspectors and started nuclear production once again. Between 1995 and 2002, the U.S. gave $400 million in energy assistance to North Korea.

Fast-forward to 2005, the so-called six-party talks between the U.S., China, Japan, Russia, North Korea and South Korea resulted in a "Joint Statement." North Korea once again said it would stop its nuclear weapons program in exchange for food and energy aid from the other nations.

Current North Korean leader Kim Jong-un took power in 2011 following his father's death. He's now extended his own olive branch to the U.S., saying — once again — the country is willing to denuclearize. The White House confirmed Trump will meet with Kim sometime in the next couple of months. But the time and place have yet to be determined, and the outcome of those talks is an open question.