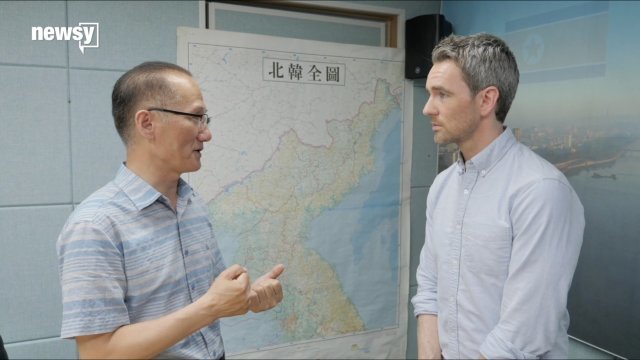 Kim Seung-chul escaped North Korea in the 1990s. Today, he is fighting back against propaganda back home — one radio broadcast at a time.

Kim lives in Seoul, South Korea, and runs North Korea Reform Radio. He spoke to Newsy about his life and his mission.

Here is a partial transcript of the interview.

Chance Seales, host of Newsy's "The Why": You do a radio program in here?

Kim Seung-chul, director of North Korea Reform Radio: Yeah. The broadcast of the show is done in shortwave radio. There are two recording rooms. In here, the show that we're doing today is called "Young People's Mission for Reunification," which is the young people of North and South coming together to discuss what we are going to do to achieve reunification ... discussing the realities of North and South and finding ways toward reunification ... toward freedom and human rights. We discuss this through the talk show format. This is what the program today would be.

SEALES: This is professional, but also personal for you. You actually began your life in North Korea?

SEALES: So you were born here?

KIM: Yeah. I was born here. I graduated high school and college. I was a civil engineer. I went to Russia for logging in 1991. In 1993, I escaped from the logging company. I came to South Korea in 1994. I worked for North Korea Research Institute for 11 years in South Korea. After that, I wanted to give information to people in my hometown ... information about freedom, human rights and change.

SEALES: So you capture it here, put it in the system, blast it out to Uzbekistan, and then it winds up in North Korea?

KIM: Right, and other than radio, we also make documentaries. We put it on micro SD or USB and send it to North Korea.

SEALES:  What goes in it? Is it propaganda? Is it personal stories?

KIM: Recently, we ran out of budget. We haven't been able to make documentaries. But in the past, documentaries that we made were about Kim Jong-il saying he does politics for the people, but he actually does it for himself. Last year in February, Kim Jong-nam was assassinated at an airport in Malaysia and Kim Jong-nam was vouching for reform back in the 1990s ... and he was ostracized, because he was vouching for reform. And the dictators like Romania's Ceausescu, Gaddafi, Saddam Hussein and how they end up. We make documentaries about these.

KIM: We, by doing this show ... people inside North Korea listen to the show. There are seven or eight people who have defected into China and Russia. They called our show, saying, "We have escaped. Please help us." We rescued them and brought them to Seoul. That happened, and people from North Korea who defected have said to us that [they] listened to the show. There are not hundreds of them. There are probably dozens of them. That level. But in that respect, I do believe that we are contributing to a change in North Korea.