North And South Korea Leaders To Meet Sometime In September 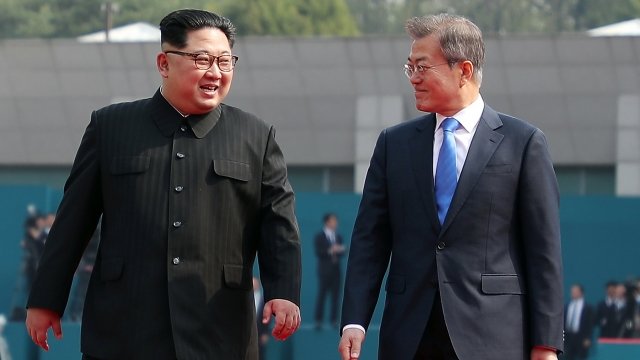 SMS
North And South Korea Leaders To Meet Sometime In September
By Katherine Biek
By Katherine Biek
August 13, 2018
These upcoming talks will be the third time the two leaders will meet in person.
SHOW TRANSCRIPT

Officials from both countries announced the details Monday — the same day they held high-level talks to discuss the implementation of a declaration the two leaders signed back in April.

September's meeting will be the third time Moon and Kim meet in person. Officials didn't announce an exact date for the summit, but did say it will be held in North Korea's capital.

When Moon and Kim first met in April, they agreed to "cease all hostile acts against each other" and work to denuclearize the Korean Peninsula.

The two later met for impromptu talks in late May.

When Moon travels to North Korea this fall, he'll reportedly be only the third South Korean leader to travel to Pyongyang for such a meeting.