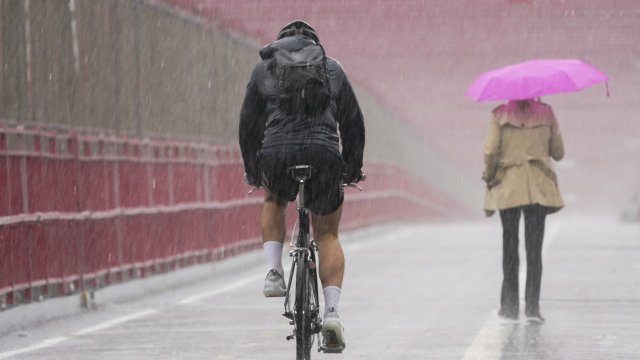 A Nor'easter that battered the U.S. coast with hurricane-force wind gusts has left 425,000 people without power in Massachusetts and forced the closure of bridges, ferries and schools in the region on Wednesday.

The Massachusetts Emergency Management Agency reported the widespread power outages Wednesday morning as areas along the coast experienced wind gusts of 80-90 miles per hour. About 90,000 people lost power in Rhode Island, according to National Grid.

The National Weather Service in Boston reported that travel is not recommended early this morning in southeast Massachusetts because of the hurricane-force wind gusts, numerous downed trees and power outages. The highest wind gust of the storm was recorded at 94 mph at a ferry dock on Martha's Vineyard, it said. Winds are slowly diminishing throughout the day.

The body of a kayaker who went missing off Long Island was recovered near the Bronx after being spotted in the water by a helicopter search crew, Coast Guard officials said Tuesday. Laurence Broderick, 45, reportedly left Hempstead at about 9 p.m. Monday, a few hours before heavy rain started falling in the region, and was headed to Mamaroneck. He was reported missing early Tuesday morning.

In Connecticut, power lines came down on a school bus headed to Middletown High School on Wednesday morning. No injuries were reported. Six students were on the bus, which continued its route after emergency responders removed the power lines. About 15,000 homes and businesses were without power Wednesday morning.

The Rhode Island Turnpike and Bridge Authority closed the Newport Pell and Jamestown Verrazzano Bridges due to wind gusts of 70 mph early Wednesday morning, then reopened them shortly after to most vehicles. School buses were still not permitted to cross. Ferry service to Martha's Vineyard and Nantucket was suspended Wednesday. Dozens of schools canceled classes.

Power outages were scattered around Maine, where wind continued to whip on Wednesday morning. Central Maine Power said it was addressing about 17,000 outages. That was about 3% of total customers, the utility said. Downed tree branches and slick roads also caused traffic delays in parts of the state.

There were about 6,000 outages across New Hampshire but no major damage.