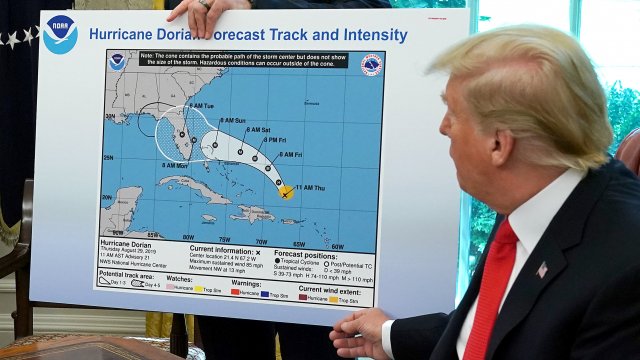 SMS
NOAA Reportedly Told Staff Not To Contradict Trump On Dorian's Path
By Briana Koeneman
By Briana Koeneman
September 9, 2019
According to The Washington Post, an official told staffers to "only stick with official National Hurricane Center forecasts if questions arise."
SHOW TRANSCRIPT

A top official with the National Oceanic and Atmospheric Administration reportedly told employees not to contradict President Donald Trump's claims that Hurricane Dorian posed a serious threat to Alabama.

According an agency-wide directive seen by The Washington Post, staffers were told to "only stick with official National Hurricane Center forecasts if questions arise [about] some national level social media posts which hit the news" that day.

The directive did not mention President Trump by name. But an NOAA meteorologist told the Post it was "understood internally" to be referring to the president.

Earlier this month, President Trump tweeted that Alabama would "most likely be hit (much) harder than anticipated" by the hurricane. At the time, forecasts only showed a small risk of tropical-force winds in a small section of the state.

The National Weather Service office in Birmingham was quick to point that out in a tweet of its own. And the NOAA directive was sent out not long afterward.

The Post says the agency sent out a similar message after the president showed an NOAA map that appeared to have been altered to show the storm could hit Alabama.

On Sunday, the NOAA's acting chief scientist said in an email obtained by the Post that he's looking into whether the agency's response to President Trump's claims violated its policies and ethics.