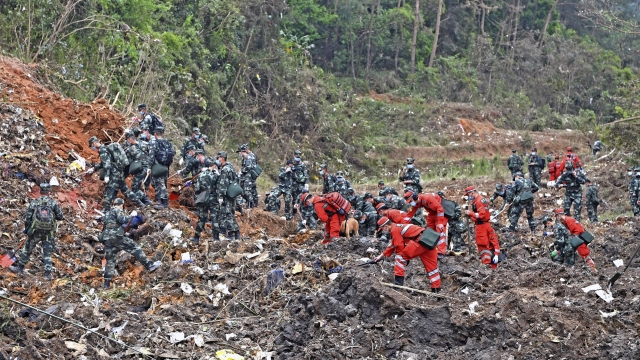 Investigators are urgently trying to answer the question as to what sent a packed commercial airliner plunging toward the ground in a remote, mountainous region in southern China.

The incident was caught on video by a security camera near its crash site.

"It's shocking as an aviator, shocking for the public to see that, you know, my first instinct is what initially created this?" said Chad Kendall, a professor of aviation and aerospace science at Metropolitan State University of Denver.

There were 132 people on board. Search teams scouring the impact zone are finding mostly small pieces of debris, identification cards and wallets — but no survivors.

"We are deeply distressed, and we have been unable to rest or eat in peace," said Sun Shiying, chairman of China Eastern Airlines.

The Boeing 737 was flying at 29,000 feet Monday when it suddenly nosedived, plummeting to the ground in just minutes. Now determining the cause could take investigators a year or longer.

The airline says the crew was in good health.  The top priority now is finding the so-called black boxes. The data and cockpit voice recorders should provide the biggest clues.

"What was the initial surprise to the crew?" Kendall said. "What caused the aircraft to initially pitch down and whether again that was pilot or mechanical? And then what were the crew doing after that fact?"

The model of 737 that crashed is one of the safest and most popular in the world. Boeing has delivered more than 5,000 planes worldwide, with nearly 1,200 to its biggest market — China.

It is not the same as the 737 MAX, which was temporarily grounded after two deadly crashes in 2018 and 2019. Those were blamed on a flaw in a system that mistakenly pushed the nose down, and sweeping reforms and tougher FAA oversight followed.

"Unfortunately these events occur, and we learn from them," Kendall said. "Some positive and better pieces have been put together after the MAX accidents that make me confident to go ride in one."