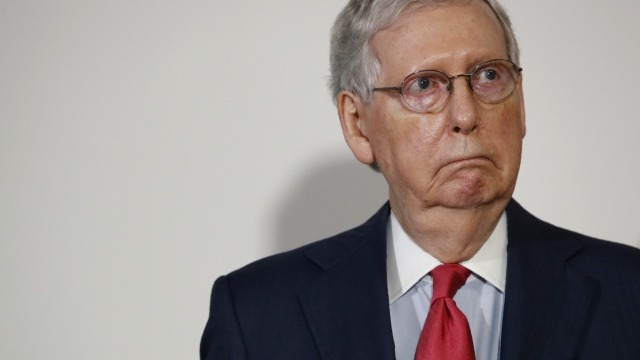 On Thursday, a next-round stimulus package, including plans to extend a federal unemployment benefit, never made it out of the gate.

“We have a fundamental agreement. We still have a lot of text that was being worked on overnight,” Treasury Secretary Steven Mnuchin told reporters at the White House Thursday morning.

Senate Majority Leader Mitch McConnell never appeared on the floor to propose a bill, instead sending Secretary Mnuchin back to the drawing board without a final consensus between the White House and Senate Republicans on how to proceed.

But with no bill, details on the Republicans’ plan are becoming clearer.

The payroll tax cut, however, which has been pushed by President Trump, was left on the chopping block.

“The president’s priority for the moment is to get money to Americans quickly,” Mnuchin said. “One of the problems with the payroll tax cut is it takes time, so right now we’re a lot more focused on the direct payments.”

One of the harshest critics of a new relief bill is Republican Sen. Rand Paul of Kentucky, who spoke with Newsy Thursday afternoon

“Republicans, together with Democrats, are going to preside over adding $5 trillion to the deficit in about five months,” Paul told Newsy. “That's unconscionable, and I think terribly dangerous for our currency, our economy, and our country. … I'll do everything I can to oppose [the Senate’s bill].”

Any Republican-led bill is likely to propose lowering the $600 a week unemployment bonus, which Republicans say is disincentivizing Americans from returning to work.

“If government pays people more not to work than they get for working, guess what? You'll get institutional unemployment,” Paul said. “That's what we have right now.”

“If [the additional benefit] is allowed to expire, people will go back to work,” he added.

On Thursday, Mnuchin signaled the White House would be open to continuing the benefit, albeit with a reduction.

“We’re not going to pay people more to stay home than to work,” he said. “We’re looking at something that looks like a 70% wage replacement, and we’re working on the mechanics of that.”

Across the aisle, Democratic leadership on Capitol Hill say they’re still waiting for Republicans to bring their proposal to the table.