No-Deal Brexit Threat Hangs Over EU Citizens In The U.K. 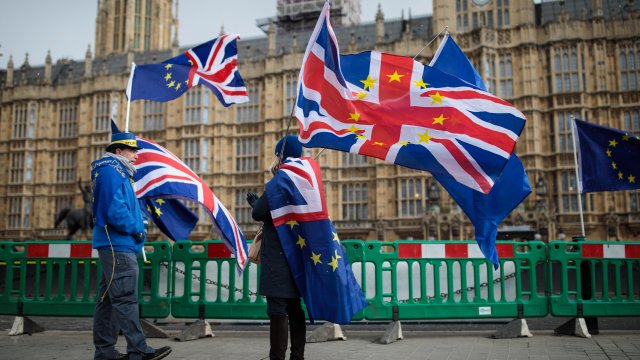 SMS
No-Deal Brexit Threat Hangs Over EU Citizens In The U.K.
By Matt Picht
By Matt Picht
January 17, 2019
As the prospect of a no-deal Brexit grows closer, expats caught between the EU and the U.K. are looking for reassurances about their status.
SHOW TRANSCRIPT

Brexit is months away, and the prospect of the U.K. leaving the EU without an agreement is looming larger and larger. For the millions of people who rely on the EU to live in the U.K., the potential of a no-deal Brexit is particularly worrying.

Hedwig Hegtermans is a volunteer with EU citizen activist group the3million. She's a Dutch citizen but moved to the U.K. in 2001 to be with her now-husband.

Hegtermans told Newsy: "So when I woke up and it was actually Leave, I felt as at that moment already that the legal rug was being pulled from beneath me."

She's also one of an estimated 3.7 million people living in the U.K. who were born in other EU countries. That's over 5 percent of the country's population. There are also approximately 1.2 million U.K. citizens currently living abroad in the EU.

As EU citizens, all of those expatriates currently have the right to live, work and move freely within the bloc. But the U.K. exits that system once it leaves the EU — and that could make life difficult for any expats living across the EU-U.K. divide. 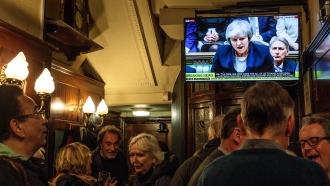 What's Next For U.K. Prime Minister Theresa May?

The previous deal between the U.K. and the EU enshrined some protections for EU and U.K. citizens. But Parliament's rejection of the deal has saddled those citizens with a lot of uncertainty about what happens next.

Hegtermans said: "So what I'm already doing is to try to gather as much as possible a paper trail to prove that I'm here. ... If everything fails, I can at least say, 'and I'm the wife of a British citizen'. So maybe, I don't know, but maybe it will mean for something."

If a no-deal Brexit does happen, the U.K. government says it's going to allow EU citizens to apply for what's called "settled status." That's supposed to be a guarantee from the U.K. government that all the protections and rights they enjoy now will continue into the post-Brexit era. The problem with that plan is it's not as solid as an international guarantee like the withdrawal deal would be: future U.K. governments could decide to revoke those protections unilaterally.

A group of European Parliament members is currently petitioning the bloc to form a separate pact with the U.K. just on citizen's rights so expatriates will have some protections even if a no-deal Brexit does happen.

Meanwhile, U.K. Prime Minister Theresa May is trying to come up with an alternative to the withdrawal deal. Whatever she settles on still has to win approval in both the U.K. and the EU parliaments before the Brexit deadline.