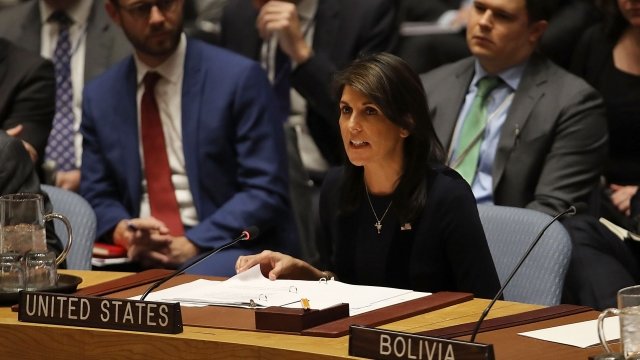 SMS
Nikki Haley To UN: US Believes Russia Used Nerve Agent In UK Attack
By Jake Jones
By Jake Jones
March 14, 2018
Haley made the statement even though President Donald Trump hasn't yet explicitly said he believes Russia was behind the attack.
SHOW TRANSCRIPT

U.S. Ambassador to the U.N. Nikki Haley didn't mince words in her condemnation of Russia, which stands accused of orchestrating an assassination attempt in the U.K. She called on the U.N. Security Council to take action or be discredited.

"Let me make one thing clear from the very beginning: The United States stands in absolute solidarity with Great Britain," she said. "The United States believes that Russia is responsible for the attack on two people and the United Kingdom using a military grade nerve agent."

A former Russian spy-turned-double agent and his adult daughter were found unresponsive on a park bench in England earlier this month. They and a police officer are hospitalized after being exposed to what officials say is a Soviet-developed nerve agent. Russian officials deny any involvement.

Haley's language was stronger than President Donald Trump's so far. Trump told Prime Minister Theresa May the U.S. stands in solidarity with her government but stopped short of assigning blame.

"This is a defining moment," she said. "Time and time again, member states say they oppose the use of chemical weapons under any circumstance. Now one member stands accused of using chemical weapons on the sovereign soil of another member. The credibility of this council will not survive if we fail to hold Russia accountable."