NIH To Vanity Fair: A Nonprofit It Funded Worked With Wuhan Institute 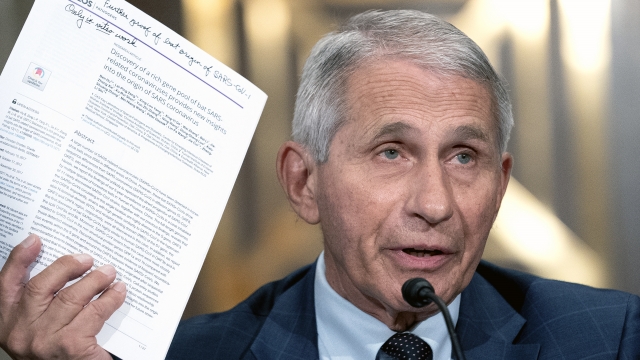 He told "Axios on HBO": "He should be fired for a lack of judgment. He's probably never going to admit that he lied. He's going to try to work around the truth and massage the truth."

Paul is accusing President Biden's chief medical adviser of lying about a National Institutes of Health grant — given to a subcontractor — to conduct an experiment with the Wuhan Institute of Virology in China.

In an interview with ABC News, Fauci responded to Paul's comments.

"I obviously totally disagree with Sen. Paul. He's absolutely incorrect. Neither I, nor Dr. Francis Collins — the director of the NIH — lied or misled about what we've done," said Dr. Fauci.

The NIH sent a letter to members of the House Committee on Energy and Commerce on Wednesday. The letter discusses a nonprofit group, Eco-Health Alliance, that conducted an experiment with the Wuhan Institute of Virology.

The results showed enhanced coronavirus in bats could potentially be more infectious to humans. That research violated the NIH's grant conditions.

Eco-Health Alliance sent its progress report in August — nearly two years after it was supposed to.

An NIH spokesman told Vanity Fair Dr. Fauci did not have access to that report and was entirely truthful in his statements to Congress in July. Eco-Health Alliance claims it sent the report in April 2018.