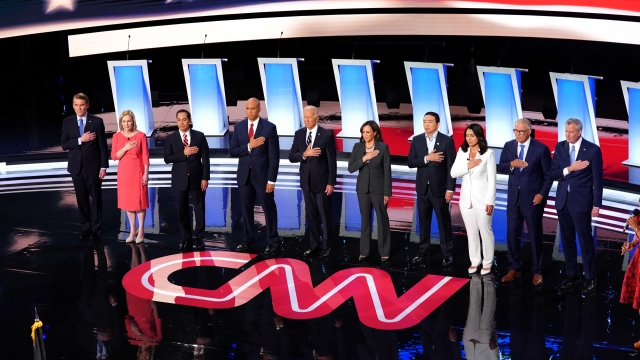 Ten more Democratic presidential candidates took the stage in Detroit Wednesday night, and there was plenty of head-butting.

All eyes were on Biden and Harris, and whether the two would spar again. And it was the first thing that happened.

"The senator's had several plans so far and any time someone tells you you're going to get something good in 10 years, you should wonder why it takes 10 years," BIden said.

"We will ensure that everyone has access to health care. Your plan by contrast leaves out almost 10 million Americans," Harris said.

Health care dominated the beginning of the debate, with multiple candidates attacking each other's proposals directly.

"That is totally different from the plan that Sen. Warren and Sen. Sanders and Sen. Harris have proposed, which would make illegal employer-based health insurance in this country and massively raise taxes on the middle class to the tune of $30 trillion," Bennet said.

"Certainly, with all due respect to Sen. Bennett, what he's saying is absolutely inaccurate about taxes. Americans right now are paying so much money for their health care. Ask people about the reality of premiums, deductibles, co-pays, out-of-pocket expenses. That's worse than any tax," de Blasio said.

Discussion moved on to other policy issues, including climate change, immigration and criminal justice. There were plenty of contentious moments, and Biden was frequently the target.

"Why did you announce on the first day a zero tolerance policy of stop and frisk and hire Rudy Giuliani's guy in 2007 when I was trying to get rid of the crack cocaine issue," BIden said. "Mr. Vice President, there's a saying in my community that you're dipping into the kool-aid and you don't even know the flavor," Booker said.

Despite the head-butting on stage, a few candidates took the opportunity to remind viewers that they all have the same ultimate goal — beating President Trump in 2020.

"I speak for just about everyone watching when I say I would trust anyone on this stage more than I trust our current president on matters of criminal justice," Yang said.

“I will not do foreign policy by tweet, as Donald Trump seems to do all the time," Booker said.

"I would take any Democrat on this stage over the current president of the United States who is rolling it back to our collective peril," Harris said.

"Number one, we can no longer allow a white nationalist to be in the White House," Inslee said.

The next debate will be in September in Houston, and the field of participants will probably be smaller. The Democratic National Committee is requiring candidates to reach 2% support in at least four national polls, and have at least 130,000 unique campaign donors.