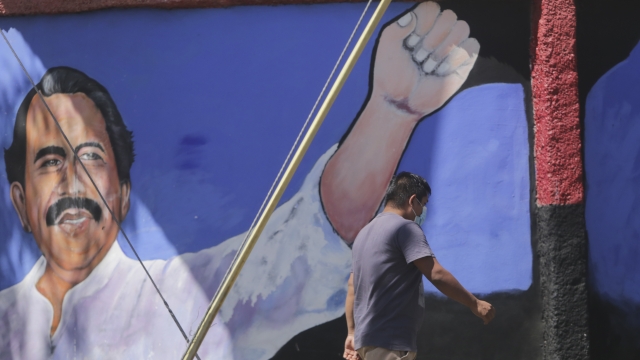 So far, the U.S., United Kingdom and the European Union have rejected the elections. But some countries have shown support or have not condemned them.

Claiming victory for what many call a "parody," Daniel Ortega celebrated his win for a fourth consecutive presidential term in Nicaragua — a win after a long reign of terror.

U.S. Secretary of State Antony Blinken said the U.S. is ready to sanction the Nicaraguan regime. The U.S. could impose economic sanctions, visa restrictions and coordinated actions against those it says are complicit in supporting the Nicaraguan government's "undemocratic acts."

"Seventy to 80% of the people abstained from voting, and nearly 40 opposition leaders have been put in jail since the last four months, and among those were seven potential presidential candidates," Jagger said.

Jagger says she's happy President Joe Biden called the election a pantomime but pushed for him to back the so-called "Renocer Act" or "Be Reborn Act" that aims to intensify pressure on Ortega and pursue greater regional cooperation to boost democratic institutions.

"After President Biden signs it into law, it will allow to put more sanctions and to really look very closely into what the lending institutions such as the IMF (International Monetary Fund) and the World Bank will do," Jagger said. "But I am calling for the international community, for the EU and for countries throughout Latin America to declare the elections in Nicaragua illegitimate."

Analysts say Ortega's win could cause even more Nicaraguans to leave the country.

Tens of thousands of Nicaraguans have fled their homeland and settled in countries like Costa Rica, Spain and the U.S., trying to avoid persecution. Since 2018, the government has brutally cracked down on protests, killing and detaining dozens.

Some of those Nicaraguan exiles are holding protests in Costa Rica against the election results.

So far, the U.S., United Kingdom and the European Union have rejected the elections. But some countries have shown support or have not condemned the elections, including Venezuela, Cuba, Bolivia, Argentina, Iran and Russia.

By NOAA via AP

Lights started to flicker on in the capital, Havana, but much of the city and other parts of western Cuba remained without power Wednesday.