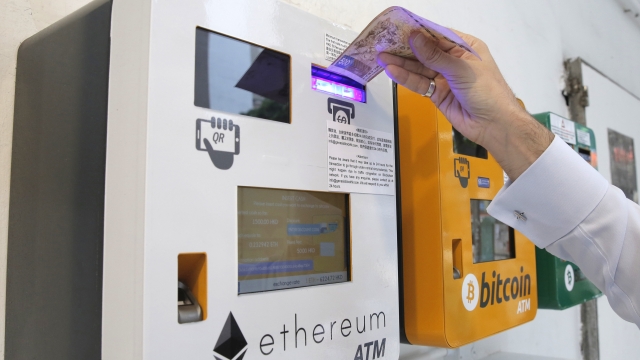 Digital artwork like NFTs, or non-fungible tokens, aren't like a painting that hangs on a wall or a sculpture that sits on a desk. In order to buy and sell and protect their uniqueness, they need power -- and lots of it. Critics say this is adding to the already tremendous electricity problem that blockchains are responsible for.

Ethereum, the main blockchain used for trading and buying NFT art, is currently using an estimated 38 terawatts of energy per year, about as much as the entire country of Bulgaria for its roughly 7 million residents.

Like most major cryptocurrencies, Ethereum uses a proof-of-work model to verify when someone has purchased an NFT. In this process, miners using energy-intensive computers compete against each other to open new blocks to validate transactions.

"What they're actually doing, it's kind of like running a massive lottery. You do processing transactions, trying to create the next block for the blockchain,' said Alex de Vries, founder of Digiconomist.

Digiconomist has been tracking the carbon footprints of bitcoin and Ethereum.

"If there's anything you want to do on Ethereum, whether it is minting an NFT, bidding on an NFT, trading NFTs, transferring NFT, everything requires gas," said de Vries.

De Vries says it's difficult to know exactly how much NFTs contribute to the overall Ethereum carbon footprint but noted that there are other green solutions for NFTs available right now.

"Like if you want to build an NFT on a green algorithm, you can do so. There's plenty of options, but it's just that Ethereum is still the most popular one," de Vries said.

One solution: Moving to a proof-of-stake model which reduces the amount of energy by 99%. Proof of stake differs because the miners are chosen to validate block transactions according to how many coins they hold, and not on computing power.

"We are very comfortable and confident that over the next sort of six to 18 months, probably somewhere in the middle, Ethereum will fully make that flip over to proof of stake," said Joseph Pallant, Founder and Executive Director at the Blockchain for Climate Foundation.

Pallant agrees that NFTs have a carbon footprint, but is unsure how much they contribute to climate change.

"It's always closing blocks and having its transactions, and that if you're engaging it with an NFT, you are kicking out some other transaction, but you're not actually increasing the throughput of that system and having a direct impact on increased emissions," Pallant said.