Newsy Analysis: Polls Further Off Than In 2016 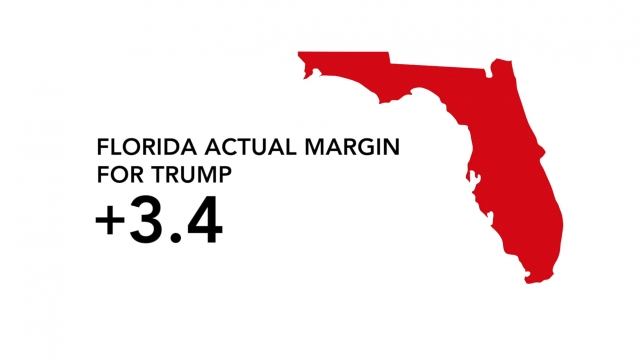 A lot has changed since the 2016 election, but one thing is sounding very familiar: Pollsters are under fire for election predictions that didn't turn out to be true. Florida was one of the biggest upsets of the 2020 election.

According to the average of dozens of Florida polls collected by the news site FiveThirtyEight, Biden was expected to win by 2.5 percent. But he actually lost by 3.4 percent. Polls were off by almost 6 percentage points.

That difference is rare. Newsy pulled more than 100 average polling forecasts for the last three decades — looking at swing states going into presidential elections. An error as big as Florida's occurs about one in 10 times.

In most of those cases, the predicted winner still won the state — they just won by more than expected.

Take Iowa in this election. Polls suggested it would go to Trump by a little over 1 percent. Now, with 99 percent of the vote in, he's ahead by more than eight points.

Florida is different. Polls indicated the wrong candidate would win. That combination — swing state, wide margin, wrong candidate — has only happened twice in the past 30 years.

Back in 2016, Donald Trump won several swing states after polls suggested they would go for Hillary Clinton. These results shook many people's faith in polling.

But all those polls were closer to predicting the actual vote than they were for Florida or Iowa this year.

Everyone knows that polling errors are nothing new. And it's too early to tell how accurate this year's polling will turn out to be overall. But in the 23 states that have reported more than 99 percent of their votes, our analysis shows that the polling errors of 2020 could end up being the worst in decades.

Correction: A previous version of this video indicated that polls expected Hillary Clinton to win Iowa and Ohio in 2016. This video has been updated.