The New Yorker Disinvites Steve Bannon From Festival After Backlash 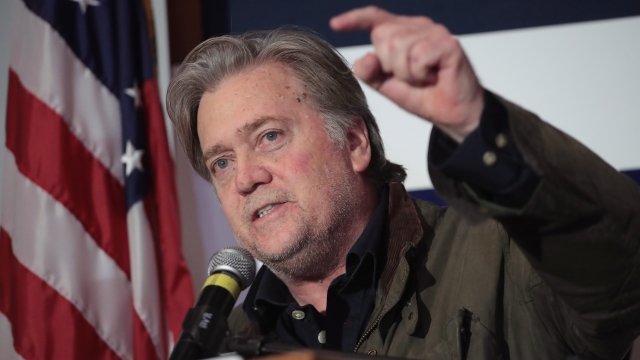 The New Yorker's editor had a change of heart after high-profile celebrities started tweeting they weren't going to its annual festival if Bannon was.

A day after announcing Steve Bannon will appear at its annual festival, The New Yorker rescinded its invitation.

Judd Apatow said “If Steve Bannon is at the New Yorker festival I am out. I will not take part in an event  that normalizes hate.  I hope the @NewYorker will do the right thing and cancel the Steve Bannon event. Maybe they should read their own reporting about his ideology.”

Actress and comedian Bridget Everett said, "Honored and excited to be a part of the @NewYorker festival. But if Steve Bannon is in, I'm out."

And the writer and director of “Sorry to Bother You,” Boots Riley tweeted, "Just found out Steve Bannon is doing event the @NewYorker festival that I was gonna be at until the moment I learned he would be there. I won't be there if he's gonna be there."

New Yorker editor David Remnick responded in a statement — pointing out Bannon played a critical role in electing Donald Trump. But after listening to his writers and staffers, he ultimately decided to disinvite him.

Bannon responded on Monday, saying in an email to the AP, "David Remnick showed he was gutless when confronted by the howling online mob."

Andrea Gonzales is from Michigan. She graduated from the University of Missouri's journalism school in 2016. She has been employed by many media companies. When her liver started to fail, she started making a film (which is now in the final stages of production). She enjoys being healthy -- and helping communities be healthy too. Her cat's name is Precious. @AndreaGonz_