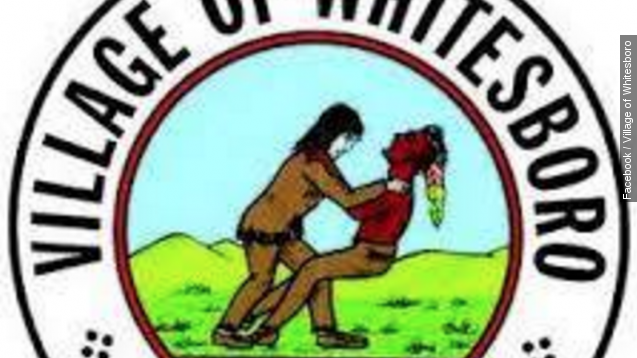 SMS
New York Town Votes To Retain 'Inappropriate' Seal
By Grant Suneson
By Grant Suneson
January 12, 2016
Residents of Whitesboro, New York, voted to keep their town seal after some raised concerns that the image could be perceived as racist.
SHOW TRANSCRIPT

The story goes that Whitesboro’s founder, Hugh White, was challenged to a wrestling match by a member of the Oneida tribe. White quickly pinned the challenger, which made him a "hero" to the Oneida and fostered goodwill between settlers and Native Americans.

The villages’s official website says the seal shows a "friendly wrestling match that helped foster good relations between White and the Indians."

But it’s easy to see how a white man with his hands at the throat of a Native American could be perceived as offensive. (Video via Time Warner Cable News)

"I can speak from someone who moved to the area and saw it for the first time, and it was comical how inappropriate it was. Except that it was too sad to be comical," Whitesboro resident Jennifer Recht said.

Many residents didn't see it that way. Of the 212 votes cast, nearly 75 percent wanted to keep the same seal instead of using one of several new options.

Though it has been changed before over similar concerns, the seal has always depicted that wrestling match. But in the 1970s, White’s hands were moved to the shoulder and away from the neck so it wouldn't look as aggressive. (Video via WKTV)

Though the seal won by a wide margin, village officials said the vote isn't binding, and they will discuss the results in an upcoming meeting.