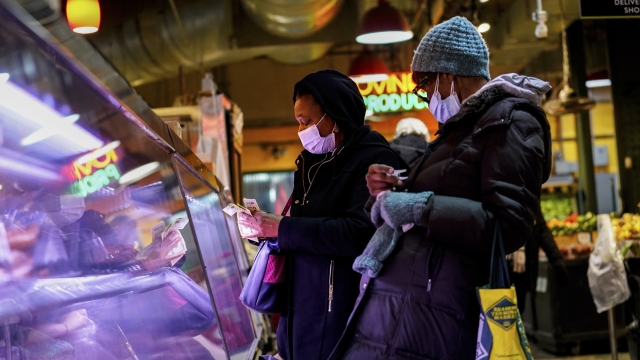 SMS
New York Pledges To Stay Open, While Other States Remain Cautious
By Alexandra Miller
By Alexandra Miller
April 18, 2022
COVID-19 cases are up slightly nationally, but they appear to be less severe, with deaths and hospitalizations still dropping.

COVID cases are creeping up again across the country, including in New York state.

"I’m not going to shut it down again, you can count on that," she said.

While speaking on a local radio show Sunday, Gov. Hochul said while she is protecting New Yorkers' health, she's also protecting the economy.

Statewide, about 7,000 people per day are testing positive for COVID, though the true number is likely higher. New York City is on track to move back to a medium risk level soon.

"We hope that by having folks mask up whenever they're in public indoor spaces, we can get ahead of the wave and keep it from reaching a peak like we saw in January with the Omicron variant," said Philadelphia Health Commissioner Cheryl Bettigole.

A handful of universities, predominantly in the Washington, D.C., area, have also reinstated their mandates despite low positivity rates, and the mandates go further than CDC guidelines.

While cases are slightly up nationally, they appear to be less severe. Deaths and hospitalizations are still dropping.

It's difficult to tell how accurate the case count is, with more people buying at-home tests and not necessarily reporting a positive result. Plus, many places are phasing out mandatory testing. Fairfax County, Virginia, was once the epicenter of the COVID school debate, and now it's cutting some of its requirements, including its optional weekly scheduled screenings for all schools. California is delaying vaccine mandates for students until at least summer 2023.

As for the mask mandate for public transportation, the CDC had just extended it last week. It remains to be seen if the agency will appeal the federal judge's ruling, but as of right now, passengers are no longer required to wear masks.