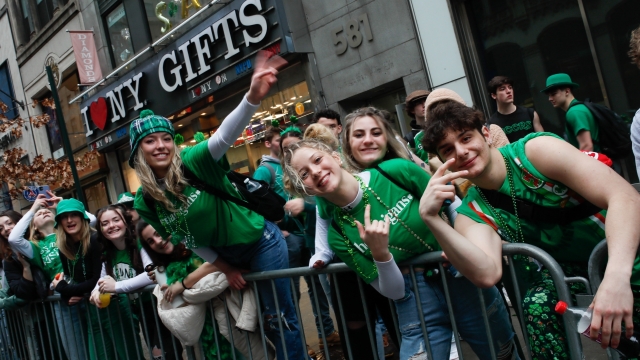 St. Patrick’s Day celebrations across the country are back after a two-year hiatus, including the nation’s largest in New York City, in a sign of growing hope that the worst of the coronavirus pandemic may be over.

The holiday served as a key marker in the outbreak's progression, with parades celebrating Irish heritage among the first big public events to be called off in 2020. An ominous acceleration in infections quickly cascaded into broad shutdowns.

The full-fledged return of New York’s parade on Thursday coincided with the city’s wider reopening. Major mask and vaccination rules were recently lifted.

The city's famed Fifth Avenue was awash with green, as hordes of revelers took to sidewalks amid damp skies to take part in the tradition for the first time in two years. The day held great importance for a city still reeling from the outbreak.

“Psychologically, it means a lot,” said Sean Lane, the chair of the parade’s organizing group. “New York really needs this.”

The city's entertainment and nightlife scenes have particularly welcomed the return to a normal St. Patrick's Day party. 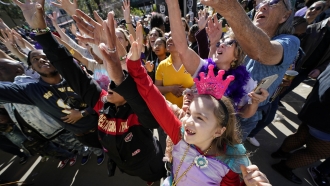 Celebrations are back in other cities, too. Over the weekend, Chicago dyed its river green, after doing so without much fanfare last year and skipping the tradition altogether during the initial virus onslaught.

Boston, home to one of the country’s largest Irish enclaves, is resuming its annual parade Sunday after a two-year absence. So is Savannah, Georgia, where the parade's cancellation disrupted a nearly two-century tradition.

Some communities in Florida, one of the first states to reopen its economy, were also bringing their parades back.

New York’s parade — the largest and oldest of them all, first held in 1762 — runs 35 blocks along Fifth Avenue, past St. Patrick’s Cathedral and along Central Park.