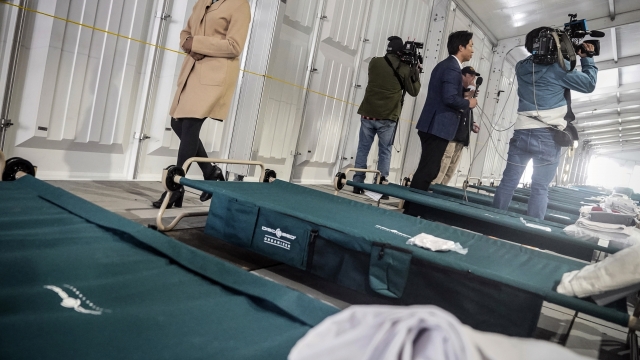 New York City Mayor Eric Adams has decided to close the Randall's Island tent facility for migrants because it failed to reach full capacity. Now asylum seekers — like 20-year-old Venezuelan Orbelk Fernandez, who stayed in the tents for almost a week — are being moved to the Watson Hotel in midtown Manhattan. It's the shelter's third move in just over a month.

Fernandez is now sleeping in a normal bed in a normal room, shared with one other person. He says he was grateful to have a place to live on Randall's Island, but as the cold weather made its way inside underneath the tents, it was nearly impossible to sleep.

Ariadna Phillips, an organizer for the Mutual Aid Collective, says she has received several similar distress calls from migrants staying at the facility.

"There was not heat in the tents, and again, the temperatures dropped to freezing at least twice in the last week," Phillips said. "Some of the distress calls we were receiving were that the migrants were very cold in the tents and because the bathrooms were outside, they had to walk outside into freezing cold temperatures to be able to access bathrooms, showers, etc., and it was raining as well."

Phillips called the mayor's plan a "colossal waste of money and resources" since the beginning, saying the camp would effectively become "flooded detention camps."

The mayor's office defends their handling of the shelters and continues to say they're acting in the best interest of the migrants.

New York City has struggled to respond to the wave of migrants being bused from Texas by Gov. Greg Abbott as a way to pressure the Biden administration on its immigration policies.

New York isn't the only city managing the crisis, though. After a bus load of migrants arrived this week, Philadelphia has joined Washington D.C. and Chicago as destinations for asylum seekers being sent out of Texas.